Being consistent in a dynamic environment: a guppy story

Sometimes things happen that can give you a whole new appreciation of the study system you are working with. For me this thing happened this year.

One day during our fieldwork, studying guppies in the rainforest of Trinidad, the sky abruptly went dark. Because we are continually observing fish for our work (and water reflections can make this challenging) we had become quite sensitive for changing light conditions. We normally have some light drizzles every so many days, but this felt different. Also, the fish seemed to change their behaviour, they suddenly became much less active.

And then it happened. It started to rain. And rain. And rain. Within the timeframe of two hours, maybe it was even one, we saw our field site vanish. The water in our study pools started rising and we stood by as we saw the outlines of our pools one by one disappear. But water kept coming and the calm delicate stream we were working in (it was the dry season) transformed into a wild river. The peaceful trickling waterfall behind us had become a flooding force of water. And then we realized it. We were caught in a flash flood.

The interesting thing was, however, that we were not so much upset about losing our field site. We just stood there in awe. We had not experienced this before. Of course, we knew we were working in a dynamic system, that was the whole point of our study, but we never saw the changes ourselves (these usually happen in the rain season) and we were mesmerized by the speed of things happening. Luckily, we got out there ok, although it took some unexplored survival skills to find our way out.

Our field site in peaceful times

Be a guppy my friend

The next day, the water was still too turbid to do anything. So, it was two days later when we came back to our exact field site, expecting all our guppies to be gone. Surprisingly, however, many of them were still there in or around of (what was left of) our pools. We knew this beacuse we had colour marked them: back-red, front-white, back-green etc. These amazing fish, of course they were still there! How else could they survive living in this environment if they would get swept away with every flood? I guess in situations of severe (environmental) changes, there are two extreme strategies: you go with the flow or you stand your ground. “Be water, my friend”, it turns out, is not a quote that guppies have ever taken to heart.

These little fish have developed strategies to keep steady when their environment changes. We study these strategies, trying to identify and understand them. We are especially interested in one crucial aspect of an animal’s life: finding food. Guppies do not only have to deal with dynamic environments, they also regularly forage on items that are patchily and sporadically distributed, such as fruits or small insects dropping into the water. Memory would only get them so far. However, making use of the information of others might be very advantageous in such situations. And this is what our new paper in Nature Ecology and Evolution is about.

A guppy being a guppy

Following others can get you places

We repeatedly studied the same individual guppies in different natural pools and we discovered that some individual guppies were consistently better in finding food than others. With help of the individual colour marks, we followed individuals and studied who was hanging out with whom. Based on these observations, we calculated how social each individual was and if this partly explained how many randomly introduced food (or control) items they found.

We discovered that more social individuals found more of the food items, possibly because they more quickly noticed when the other fish found food. Interestingly, we also discovered that males found more food resources than females. These males might have benefitted from being surrounded by many females, because guppies in pools with relatively more females also found more food items. Being attracted to females, which themselves are strongly attracted to the food, could have led the males to many of the different food items.

This Markov model we used to analyse the guppies social behaviour

Studying consistency of foraging success in the wild, independent of the local environment, is extremely complex, because it is challenging to repeatedly place individuals in new environments while staying under the selective forces of the wild. However, guppies, during the dry season, naturally form ephemeral subpopulations in temporarily isolated pools. Our experiment thus mimicked the natural conditions for guppies and this allowed us to study individual foraging success across novel environments (pools) in the wild.

In (short) summary, our study shows that some individuals, living in dynamic environments, are consistently better than others in finding food resources in the wild. We also highlight a number of individual (sex, social tendency) and population-level (sex ratio) traits that appear to mediate this foraging success. As in every study, our study findings have generated many more follow-up questions, which we also discuss in our paper. For example, how did males outperform (more food motivated) females? Do we find similar effects of sex ratio when individuals are not allowed to self-select their social environment? And under what (a)biotic conditions do the mechanisms mediating consistency break down?

Some of these questions we aim to address in the next coming years. Hopefully, without too many flash floods. 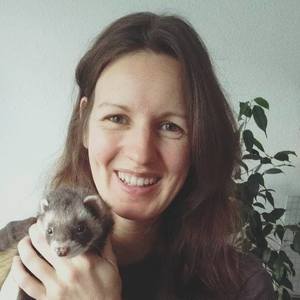