Forgotten horse from the earliest Eocene of China

Our paper in Communications Biology can be found here: https://www.nature.com/articles/s42003-018-0116-5#article-info

In 1938, Chinese geologists C.C. Young, M.N. Bien, and Y.Y. Lee collected a mammalian mandible with the ultimate molar from the “Red Bed” in the Hengyang Basin of Hunan Province, China. Years later, Young compared the specimen with those discovered in North America and Europe during his visit to American Museum of Natural History, and erected a new species Propalaeotherium hengyangensis, the first report of a fossil mammal from southern China. As mentioned by Young, “the species name is purposely dedicated not only to the locality where the specimen was found but also in memory of the severe battleground Hengyang has become against the invaders in 1944”.

Crews of IVPP continued the work in the Hengyang Basin in 1960s, including Professors C.K. Li, Z.X. Qiu, S.Y. Ting, and many others. Lingcha Fauna has gradually become a well-known early Eocene mammalian fauna from Asia. The importance of the Lingcha Fauna lies not only on the complete, vital fossils usually preserved in the carbonate nodules, but also on the fossil-bearing deposits recording the Carbonate Isotope Excursion (CIE) near the Paleocene-Eocene boundary. Additional perissodactyl fossils have been collected from the Hengyang Basin; however, the material is relatively fragmentary compared with other well preserved groups that are represented by cranial material, such as the euprimate Teilhardina, the rodent Cocomys, and the mesonychid Hapalodectes.

In addition to the holotype of Propachynolophus (=Propalaeotherium) hengyangensis reported by Young, perissodactyl fossils from the Lingcha Fauna include an additional mandible with p3-m2 and an isolated m3 of P. hengyangensis, and two maxillae with DP4-M2 and a mandible with m1-3 of Orientolophus hengdongensis. P. hengyangensis and O.hengdongensis were initially considered to be palaeotheres and early ceratomorphs, respectively; however, their phylogenetic positions within perissodactyls remain controversial, especially for Orientolophus. Although many evidence support the hypothesis that perissodactyls probably originated from Asia, the early Eocene equid fossils have not been reported from Asia. The closest match, ‘Hyracotherium’ gabuniai from Mongolia, has been regarded as belonging to an early chalicothere, not an equid. In contrast, material of Hyracotherium-like taxa is relatively abundant, common in the early Eocene of Europe and North America.

Prospecting the outcrop covered by dense vegetation at the backyard of a local farmer’s house at Hetang, Lingcha village of Hunan Province, China.

During the review of another paper on palaeotheres from middle and late Eocene of China, I was asked by a referee to discuss other early controversial palaeotheres from China, including Propalaeotherium hengyangensis. This suggestion leads to the project to recheck perissodactyls from Lingcha Fauna with more detailed comparison. With careful and detailed comparison, we found the specimens of perissodactyls from the Lingcha Fauna actually represent more diverse groups than previously thought, and it deserves a separate treatment.

We noticed that three specimens originally assigned to Orientolophus hengdongensis probably represent two different groups, because the two maxillae are different in morphology to some extent and the mandible is nearly identical to those of other ‘Hyracotherium’. Thus, we erected a new genus and species, Erihippus tingae, based on the maxilla and the mandible, which represent the earliest Eocene equid from Asia. The specific name is dedicated to Prof. Su-Yin Ting for her great contribution to the study on the early Eocene Lingcha Fauna. Orientolophus was still valid, but the name is held by another maxilla, which indeed shows some ceratomorph characters. Furthermore, we split the material of Propalaeotherium hengyangensis into a chalicothere Protomoropus and a brontothere Dangjiangia, based on their morphological characteristics reported in our paper.

Hetang locality in Lingcha village of Hunan Province, China. The fossil locality is situated at the backyard of the left house. 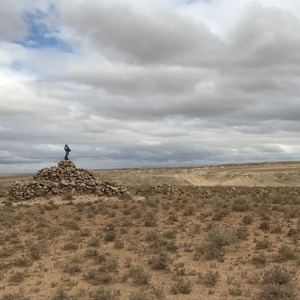