Hominin occupation of the Chinese Loess Plateau since about 2.1 million years ago

One of the biggest questions in palaeoanthropology is “when did our genus Homo first leave Africa and colonise Asia and Europe?” For several years, most researchers have assumed that this first happened around 1.85 million years ago, which is the age of the site of Dmanisi, Georgia, where wonderfully preserved skulls, post-cranial bones and stone artefacts have been found. In our paper, we report stone tools that are 2.12 million years old – some 270,000 years older than Dmanisi – and which we found in the southern part of the Chinese Loess Plateau at a new locality called Shangchen.

Link to our paper in Nature: go.nature.com/2LmYibM

The Chinese Loess Plateau covers an area larger than the British Isles, and is basically an enormous deposit of wind-blow dust called loess. This was deposited year on year for the last 2.6 million years by the winter monsoon winds that sweep across north China from Siberia and Central Asia. Loess deposition in China has been massive – over 300 m in the northwest, 175 metres in the central Loess Plateau, and c. 70 m at Shangchen. Chinese and other scientists have researched the stratigraphy and chronology of the Loess Plateau since the 1970’s, and it is now the longest, most continuous and detailed terrestrial record of climate change in the world. This is because it records both cold, dry periods (equivalent to glaciations in Europe and North America) and warmer, moister episodes (equivalent to interglacials). In cold, dry periods, only loess is deposited, but in warmer and wetter periods, loess is still deposited but soils form because there was more vegetation. As a result, Loess Plateau sections are like a layered cake, with the red fossil soils (called palaeosols) alternating with yellow loess layers. In the last 2.6 million years, there have been 33 loess layers, and 33 palaeosols. These can be dated by studying their magnetic properties as the loess particles orientate themselves relative to the prevailing magnetic field of the earth when they are deposited. Geologists have been able to date with great accuracy when the earth’s magnetic field inverted, and these changes from normal to reversed polarity are recorded in the Loess Plateau. This means that the age of each loess and palaeosol unit – and any stone artefacts found in them - is now known to two decimal places.

In theory, it is easy to establish when stone tools first appear in the Chinese Loess Plateau – all that one has to do is to examine loess sections to see if they contain stone tools. In practice, it is far more difficult. First, most of the sections in the Loess Plateau are very steep, and can be dangerous to investigate – we often had to cut hand- and foot-holds when examining the upper parts of sections. Secondly, the work is very slow, because each section has to be cleaned of any recent slope wash, and then checked very carefully for any evidence of stone. On a good day, we found 3 or 4 artefacts in a section. Fortunately, the loess in the Shangchen area of the southern Loess Plateau has a high clay content, and this means that stone objects are not easily dislodged, unlike in loose, sandy deposits, for example, when they can be easily washed out by rain.

It took us nearly 13 years to find more than 20 cultural horizons containing palaeolithic artefacts in this newly found palaeolithic locality. In our Nature paper, we only focus on a palaeomagnetic sequence that includes stone tools from 11 palaeosols and 6 loess layers that date from 1.26 million to 2.12 million years ago. We also took palaeomagnetic samples above and below the earliest artefacts, and were able to show that these are sandwiched between two periods when the earth’s magnetic field was normal as today, in a generally reversed background of the earth’s magnetic field, i.e. the Matuyama reversed polarity chron. These periods are known as the Olduvai Subchron (1.77-1.95 Ma) and the Réunion Event (2.13-2.15 Ma). The earliest artefacts are therefore ca. 2.12 Ma-old. We don’t know who made them, but it is likely to have been a very primitive type of our genus Homo. What we can state with confidence is that it was already in East China by 2.12 million years ago, and our origins in Asia are thus considerably older than indicated by Dmanisi. Moreover, the length of our artefact sequence – of 17 stone cultural horizons found in the same locality - is very rare world-wide, and indicates a repeated – but not necessarily continuous – hominin occupation of the Chinese Loess Plateau for almost a million years between 1.26 and 2.12 Ma. 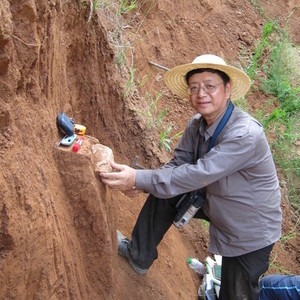