Our paper published in Nature can be found at: https://go.nature.com/2JhKqiI

It was a great opportunity to continue and scale-up an already successful research programme looking at the influence of environment, host, climate and geography on Europe’s ectomycorrhizal fungi. With Martin Bidartondo, both Filipa Cox and Laura Suz had already explored sampling design and successfully conducted two separate large-scale projects on pine and oak mycorrhizas, setting a very high standard.

I had assumed that a project at this scale would make use of the latest high throughput sequencing technology and I was looking forward to getting hands-on experience. So at the interview stage I was at first rather disappointed to hear that individual ectomycorrhizal root-tips would be analysed using Sanger sequencing. Martin then explained that our data would actually make more biological sense. By randomly sampling and identifying individual root-tips our data would be quantitative; by sequencing the whole internal transcribed spacer (ITS; rather than only ITS1 or ITS2, as in most state-of-the-art high-throughput sequencing methods) better identifications would be possible; samples would only contain one biological entity rather than a mixture of active root and soil hyphae and dormant spores and other propagules; moreover, the sampling regime had already been tried and tested and would be standardised for all plots across Europe. I was convinced and happy to accept the job. However, this approach did mean a lot more work, taking 96 soil cores and sequencing 288 individual root tips from each forest plot. Luckily, Bonnie Atkinson did an amazing job working with me in the field on most of the three years and 30 sampling expeditions across Europe and subsequently in the lab, randomly picking and characterising almost 30-thousand ectomycorrhizal root tips.

Another major role in this story was taken up by the International Co-operative Programme on Assessment and Monitoring of Air Pollution Effects on Forests (also known as ICP Forests) and its community of scientists who provide an extraordinary source of long-term (already over 30 years!) environmental, meteorological and soil characteristics data measured in situ. The community of ICP Forests people is tremendously diverse, but they endeavour to provide the same standardised measurements across Europe. By using both ICP Forests data and 137 of their plots we could explore the influence of 40 variables on the ectomycorrhizal fungal communities in Europe.

Throughout the project we got a lot of support from friends, family and Imperial College London students either as part of their MSc or for their undergraduate final year research projects. Most of these students came along with the fieldwork and then helped sample roots from the collected soil samples.

When all that fieldwork was done, and we were already well into the data analysis, Yuxin Zhang - a then first year undergraduate Imperial College student - asked if she could do a summer placement. With no funds and all the more practical work finished, we were reluctant, but Yuxin was not. She digitised the morphological characteristics as noted for each sequenced root tip and found that those characteristics were not fixed within a species as had always been assumed. Moreover, we could show that changes in morphology were linked to key environmental variables. For me, this unexpected and nearly missed finding is one of the most enjoyable results of the project. 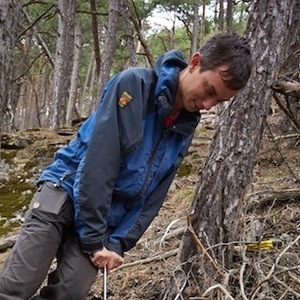