Phenological mismatch in space and time

In my twenties, before even thinking of becoming a scientist, I got involved in monitoring bird nests as a 'citizen scientist' at my local forest. Nesting attempts of Pied flycatchers, Blue tits and Great tits were monitored, counting eggs and young each spring for the British Trust for Ornithology's Nest Record Scheme. I loved getting this close to birds and their nests, and it triggered a desire to become a scientist and to utilise all this information. Fast forward 10 years, returning with a PhD and know running the same project plus developing various scientific uses of the data, I now realised how important long-term datasets like these were for examining changes in timing of breeding in the context of climatic change. The onset of spring has been advanced by climatic change in recent decades, with warmer temperatures now occurring earlier in spring. When this monitoring scheme was started in the 1950s climate change was not on the agenda.

I first heard about the match-mismatch hypothesis from work done in the Netherlands, which linked population declines of Pied flycatchers with advancing warmer springs. Caterpillars are important food for Pied flycatchers, Blue tits and Great tits, and woodland caterpillars are only abundant for a short time during spring. Timing of breeding is therefore critical; egg laying needs to be timed to ensure chicks are hungriest at the same point in spring that caterpillars are most abundant. Too early or too late and they are mismatched, with little food for adults to successfully raise them.

I met Ken Smith, who had started a network of citizen scientists quantifying caterpillar availability using a simple caterpillar dropping (otherwise known as 'frass') collection tray, and joined in. I linked up with University of Edinburgh, recording oak tree phenology for a sister project of the Woodland Trust coordinated UK Phenology Network. This network collects phenology records from across the UK, again by citizen scientists. We now had three connected trophic levels being monitored across the UK; oak-caterpillar-bird.

Previous studies of match-mismatch have mostly been from single locations and study how it varies between years, but the extent to which mismatch varies across large spatial scales was unknown. By bringing together these three datasets, along with other caterpillar abundance datasets we became aware of, we have been able to examine how the extent of mismatch varies across the UK and over time. Bird population trends, especially insectivorous birds, vary across the UK and mismatch is often suggested as an explanation of why some species do better in the north. Also, could a population that declines as a consequence of being mismatched be 'rescued' through dispersal by a better matched population?

Our study shows that at more northerly latitudes the phenology of oak, caterpillars and birds is later. Mismatch between caterpillars and birds is more prevalent in earlier (warmer) springs, and is greatest for Pied flycatchers. Most importantly we found little spatial variation in the magnitude of caterpillar-bird mismatch for any of the birds. The greater population decline seen for many birds in southern UK therefore does not appear to be caused by greater mismatch in the south than the north, and phenological mismatch alone is unlikely to explain spatial variation in population trends. Our result also has the practical implication that insights into the degree of mismatch in one location can be generalized to trends at different latitudes.

This work has only been possible because of hundreds of citizen scientists who collected most of the data we used. I am especially pleased that my own contributions firstly as a volunteer citizen scientist, and subsequently as a trained scientist, have been able to help produce what is hopefully a useful piece of work!

The paper in Nature Ecology & Evolution is here: https://go.nature.com/2F7V052 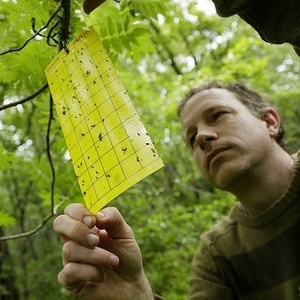