A high fire-derived nitrogen deposition in the Congo Basin

The Congo basin hosts the world’s largest contiguous block of rainforest second to the Amazon basin. These central African forests play an important role in global biogeochemical cycles owing to their high carbon densities and sheer size. Despite the obvious importance of biogeochemical research in the region, central Africa remains a blind spot in most global or pantropical studies. The main reason for this is the perception held by the international research community that the Democratic Republic of Congo (DRC) is unsafe and difficult to work in. To prospective researchers, DRC is seen as having a ‘bad reputation’, political instability, a problematic language-barrier, and limited accessibility throughout most of the country.

In our experience, working in the Democratic Republic of Congo is indeed challenging in terms of logistics, but immensely rewarding from a scientific point of view and tremendous fun if you like a bit of adventure. In my opinion, it is one of the few places in the world that is truly off the beaten track. It is well known that Congo’s infrastructure is in no way comparable to Europe or the States. When there are ‘roads’, you are for sure in for a bumpy and slow ride. When the road gets impassable for a car, you switch to motorcycle taxis. But nothing is comparable to cruising down a forest road with your sampling gear and your Congolese field team. It makes it all the more fun. And you never have to worry about logistical problems; everything – flat tyres, dead batteries, broken front axes, broken bridges etc. – is part of daily life and is easily solved by the ingenuity of the locals. Additionally, over the course of the years, we haven’t encountered substantial security issues. Only small areas are actually risky, and as long as you avoid those, all is fine. So on the bad reputation of the Congo: there is more smoke than fire in the Congo.

Figure 1. Going to the field sites. Always an adventure!

For all these reasons, our lab has invested a lot of time and energy setting up research collaborations in the Democratic Republic of Congo over the last ten years. One of the fascinating differences across the tropics on the different continents, is the extent of biomass burning in Africa, accounting for no less than 65% of the annual global burnt area. The biogeochemical links between fire emissions and subsequent deposition of fire-derived nutrients has been well described locally in other parts of the world. However, no empirical study in central Africa has looked at nitrogen deposition and its link to extensive seasonal fires. This caused us to ask: can we detect fire-emitted nitrogen deposition in central Africa? And if so, what is the magnitude of this process?

Figure 2. The view from the Congo River on our sampling sites near Kisangani, in the heart of the Congo Basin. Picture by Adam Amir.

Through ongoing collaborations with different research institutes and universities in the DRC, we managed to set up a long-term monitoring network for nitrogen fluxes in different forest types of the Congo basin - including two types of lowland tropical forest and two types of montane tropical forest. The nitrogen deposition loads for the first year of nitrogen deposition monitoring in the lowland sites were astonishingly high. Equipped with state-of-the-art analytical chemistry techniques and wind-trajectory modelling, we were able to demonstrate that a large proportion of this deposition is fire-derived, i.e. nitrogen emitted via biomass burning in the savanna zones bordering the central African tropical forest which is subsequently transported and deposited in the central Congo Basin. Some previous studies have suggested that this biomass burning, and by consequence the nitrogen deposition, are not a recent phenomenon, but instead have been persistent during the last millennia.

Figure 3. The combination of seasonal biomass burning in the savanna borders and the wind circulation system on the continent are at the basis of the high fire-derived nitrogen deposition loads in the central African forests.

As with most worthwhile research, our study gave rise to new questions. What is the fate of this high N deposition within these forests? How does this high deposition impact the regional biogeochemical cycles and ecology of the forest? Is there an effect on carbon cycling and species assemblages? To answer these, our group has recently implemented several new projects where we aim to re-parameterize land-surface models, build an eddy-covariance flux tower in the lowland forest, and increase the intensity and spatial extent of ongoing carbon and nitrogen flux monitoring.

Figure 4. Biomass burning in the lowland forest of the Congo Basin. Picture by Adam Amir. 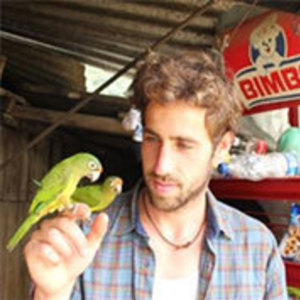