As the economic value of the carbon stored in forests is becoming realized under various payment for forest carbon initiatives, it is becoming apparent that calculating the economic value of the carbon in mangrove forests may become a key component in their conservation. This was the driving force behind constructing a global mangrove carbon stocks database at a resolution that was useful to mangrove managers at all scales. The goal was to assist mangrove managers to estimate the amount of carbon in their forests and to aggregate the data to the provincial, national, and global scales. Additionally, I was concerned that not enough emphasis was being given on keeping mangrove carbon locked away as global climate goals are pursued and knowing the global mangrove carbon stocks may help bring this to the attention of policy makers and groups such as the IPCC.

Global carbon stocks and potential emissions due to mangrove deforestation from 2000 to 2012. Nature Climate Change 2018: 1

The paper in Nature Climate Change is here: http://go.nature.com/2D2DRJ3

We know from earlier research that mangrove forests likely contain some of the highest carbon stocks of any forest type per unit area 1 and the global area of mangrove is now quite well-established. Simple back-of-the-envelope calculations can then give a reasonable global mangrove carbon stock estimate; such an estimate may even be disaggregated to continental or national scale. The problem with such estimates is that mangroves, like many resources, are often managed at a much more granular level than even the nation-state. Even within a nation or large province, mangrove carbon stocks in one region may be declining or increasing very differently from those in another region within the same nation or province. What I felt was needed was a methodology, and an estimate of whole-system mangrove stocks at high-resolution (1 ha or less), at the global level but at a high enough spatiotemporal resolution to provide meaningful local information.

Calculating high-resolution, at one arc-second or below, mangrove forest cover has traditionally been a time-consuming and costly remote sensing task. Such remote sensing derived mangrove cover databases then underpin mangrove carbon estimates. The traditional remote sensing approach would provide a mangrove area estimate often 10-15 years after the survey date and require substantial financial, computational, and human resources. The data-synthesis approach to developing high-resolution global mangrove maps at high resolution, known as CMGFC-21 2, allows for rapid global assessments of global mangrove cover at high-resolutions for a fraction of the cost and for more recent time periods. The CMGFC-21 database paves the way for a global mangrove carbon database. Computational issues remain to using a data synthesis approach, but these are generally declining costs with increasing computational resources becoming available. The development of CMGFC-21 along with allometric models for estimating mangrove biomass, latitudinal methods for estimating mangrove biomass, and global initiatives to estimate the carbon in mangrove soils allows for a geospatial approach to monitoring whole-system mangrove stocks to be developed at potentially high-resolution if computational issues could be resolved.

To construct the global mangrove database we synthesized CMGFC-21 2, MFW 3, TEOW 4, GFC 5, a global mangrove soils database 6, and not fewer than five allometric, climate-based, or latitudinal based mangrove biomass equations 7, 8, 9, 10. Each of these parameters was fed through approximately 123 million locations that are known to have mangrove present at some level. The raw data resolution is approximately 30 m at the equator, and each of these 123 million locations are tagged as mangrove present or not, the amount of mangrove present, the biome into which the location falls, the amount of mangrove soil likely present based on the mangrove canopy cover present, the above-ground mangrove biomass based on five differing modeling approaches, the below-ground mangrove biomass based on a range of a above-ground biomass to below-ground biomass conversions, and finally a range of conversions from mangrove biomass into carbon. The range of values provided allows for basic statistics to be constructed for each location and a mangrove carbon estimates, with confidence intervals, to be constructed for groups of locations. 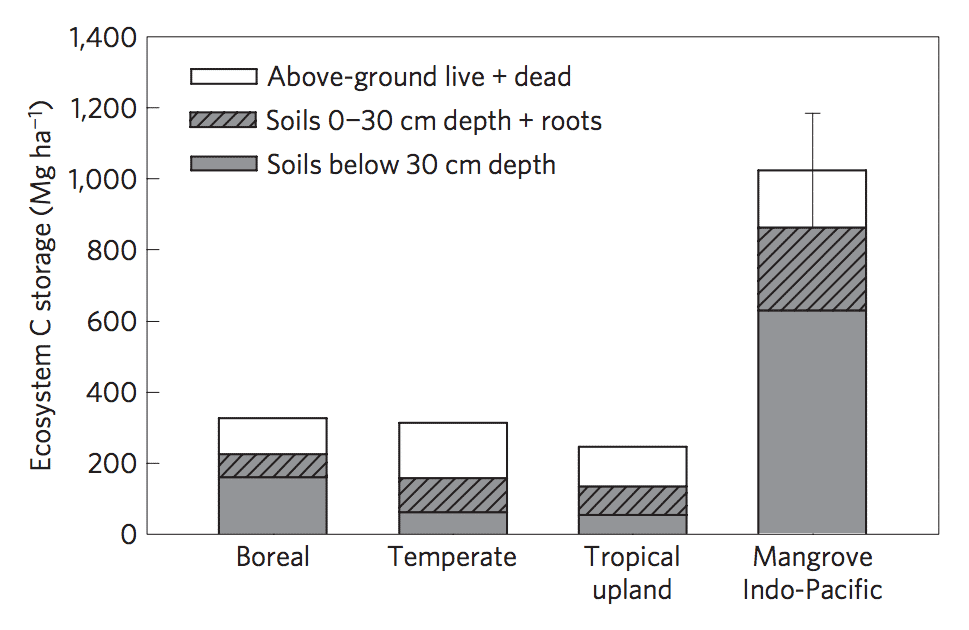 The global carbon stocks database identifies Indonesia as containing by far the largest mangrove carbon stocks globally. This is not surprising as Indonesia contains approximately one-third of the world's mangroves, what is surprising is that such a large proportion of these holdings are present in only a handful of provinces. A finding of which we had little or no prior knowledge was the importance on the mangroves of Papua New Guinea within the province of Gulf. This province contains the third largest mangrove stocks of any level-1 administrative area globally. The forests of Papua New Guinea appear as undisturbed as anywhere globally and their mangrove carbon stocks are significant globally. The database also reveals worrying losses in parts of Indonesia and all of Myanmar but many nations, particularly in the western hemisphere, appear to have loss rates close to zero. The mangrove carbon database will likely contain as many local stories as researchers are prepared to pursue. The media reports the followed the article publication focus on the loss rates and equated that to countries. “Global mangrove deforestation results in as much carbon being released as country X’s total emissions.” Here are a couple of good examples of high-quality press reports (1, 2). The release of these stocks is an important story, but the real power of the database is not global, it is not even national, and it is certainly not in comparing losses to nations. The importance of such a database was best revealed to me in Zanzibar recently when the data was used to estimate the carbon stocks of the two major islands of the archipelago (Pemba Island and Unguja). The goal was to put together a proposal to protect the remaining unprotected forests, and the carbon estimates would be a large part of any submission. Without such a database, it is unlikely the computational, financial, or human-resources could have been compiled to make a reliable local estimate. Again, it is at the local scale the Global Mangrove Carbon Stocks Database likely has the highest potential but at the more granular management level. 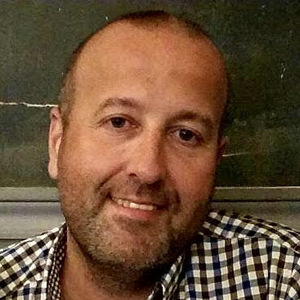 Stuart Hamilton over 2 years ago

All the data is now at https://dataverse.harvard.edu/dataverse/GMCSD