Here we discuss the historical background of the 1545 cocoliztli epidemic and clarify several points made in the popular press.

We recently published a paper in Nature Ecology and Evolution entitled “Salmonella enterica genomes from victims of a major sixteenth-century epidemic in Mexico.” In our paper we report on the recovery of DNA from the human pathogen Salmonella enterica Paratyphi C, a bacterial cause of enteric fever, from ten individuals from an epidemic cemetery historically linked to the 1545-1550 cocoliztli epidemic, which devastated Mexico and Guatemala. A blog post about our findings, methods and research questions can be found here. An in-depth discussion about the historical evidence relating to the 1545 cocoliztli epidemic is presented as part of our Supplementary materials (see pp.19-25, p. 34).

We appreciate the media coverage our work has received, though we wish to clarify two points widely mentioned that are contrary to our research design and conclusions:

The epidemic cemetery that is the focus of our study is located in the pueblo viejo (“old town”) of Teposcolula-Yucundaa, which is situated in the Mixteca Alta region of Oaxaca in southern Mexico (Figure 1). Mixtec peoples have inhabited this region for more than 3,000 years, and today Mixtecs make up 27% of the Oaxaca region’s indigenous population. Previous genetic and isotopic research has shown that the 16th century individuals included in our study are of local Mixtec origin. However, the media coverage of our work has widely reported on the high numbers of Aztec individuals killed in the context of the 1545 epidemic together with the findings of our paper, thus conflating two different indigenous Mexican populations.

Figure 1. Map of Aztec and Mixtec areas of influence at the time of European contact. Black shading indicates Aztec controlled territories in 1520 as recorded in the Codex Mendoza. Orange shading shows the lands historically inhabited by Mixtec speaking peoples. Note that by the time of European contact, the Aztec Triple Alliance had conquered many Mixtec communities, including Teposcolula-Yucundaa. For more information about the extent of the Aztec empire, see the Essential Codex Mendoza by Frances Berdan and Patricia Rieff Anawalt.

Why are the Aztecs brought up in the context of our study and who were they?

Mexico has a rich history of diverse and distinct cultural traditions. Of these, the Aztecs are perhaps the most widely recognized group.

The word ‘Aztec’ is an ethno-political term that over time has come to refer to three ethnically Nahua tribes that once controlled a large portion of pre-Columbian Mesoamerica: the Mexica, Texcoca and Tepaneca. Of these, the Mexica were the most powerful and politically dominant, and it is after them that the modern nation state of Mexico is named. For almost 100 years, between 1428-1521 these three tribes were united, forming the Triple Alliance, and together they controlled a far-flung empire that is today often referred to as the Aztec empire, the capital of which was in the area of modern day Mexico City (Figure 1).

Due to the power and hegemony of the Aztecs, their spoken language, Nahuatl, became the lingua franca throughout the entire Aztec empire, even in regions where other languages were spoken. In this way, Nahuatl and the Aztec empire compares closely to Latin and the Roman Empire. In 1520-1521 a smallpox epidemic swept through Mexico (Figure 2), which has been implicated in causing the fall of the Aztec empire in 1521. This was the first of three major and numerous minor epidemics to afflict Mexico in the 16th century after the arrival of Europeans. 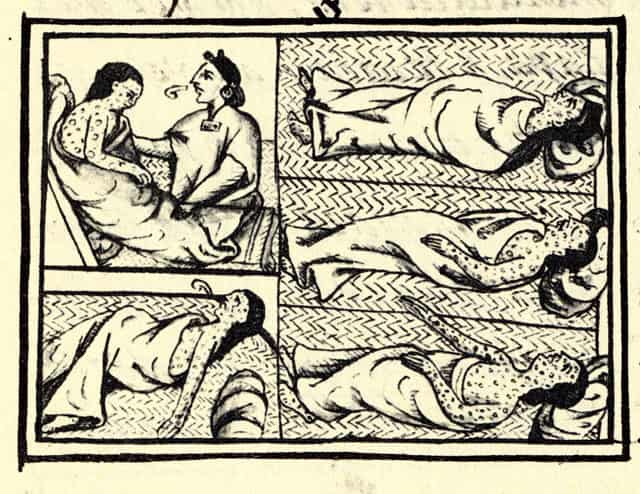 Located in Southern Mexico and far from the Aztec heartland, the region known as the Mixteca is the traditional homeland of the Mixtec peoples. Culturally, ethnically, and linguistically distinct from the Nahua peoples of Central Mexico, multiple Mixtec kingdoms were conquered by the Aztecs and incorporated into their empire in AD 1458. From 1458 until 1521, these Mixtec kingdoms were a subject territory of the Aztecs and required to make annual payments of gold, dyes, precious stones, and other luxury goods (Figure 3). The Mixtec site of Teposcolula-Yucundaa, the focus of our study, was among the towns paying tribute, and its name is a linguistic hybrid, the first part, Teposcolula meaning “place of the copper axes” in Hispanicized Nahuatl, and the second part Yucu Ndaa meaning “on the plain of the hill” or “blue hill” in Mixtec. 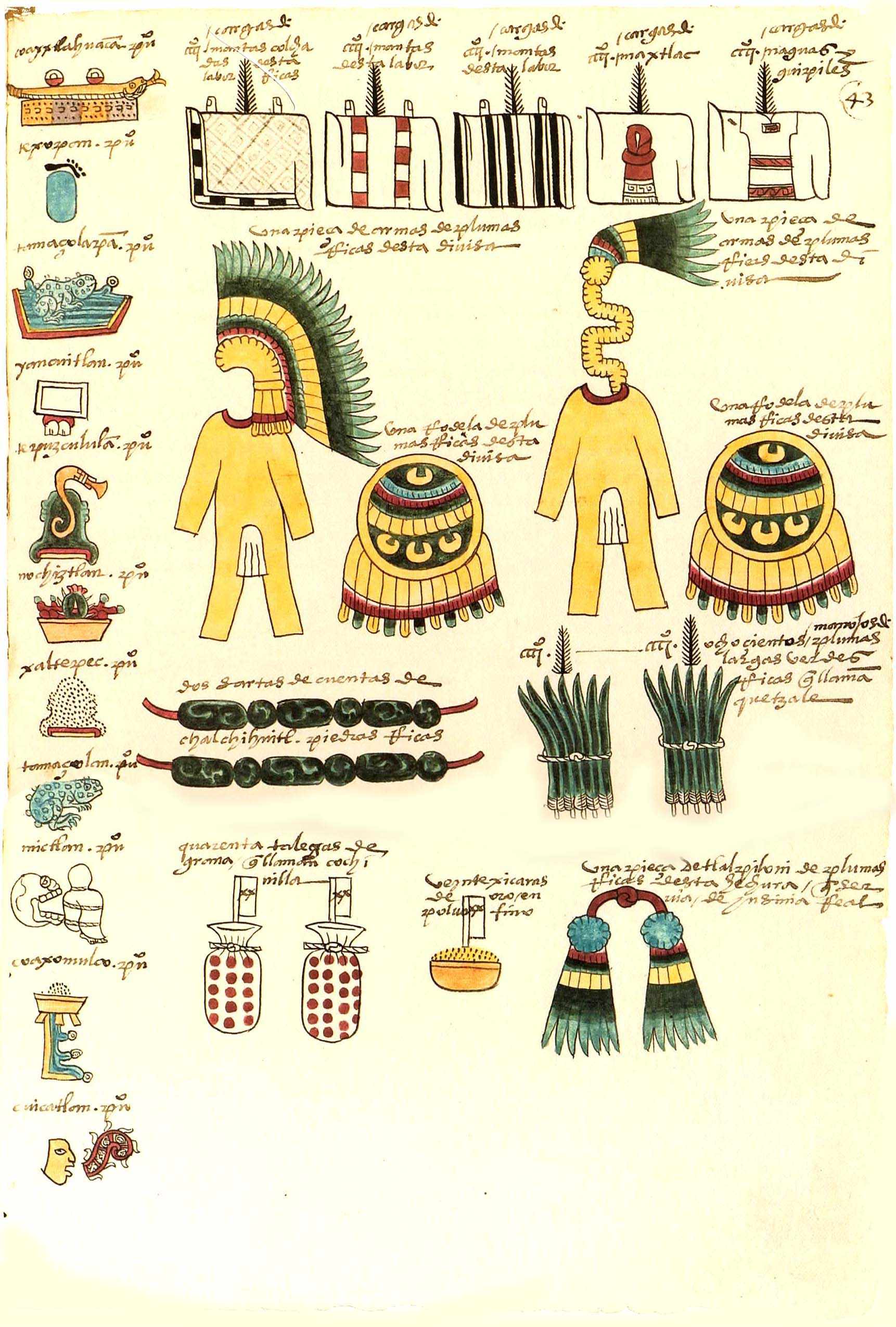 Figure 3. Codex Mendoza, folio 10r, depicting the annual tribute paid by conquered Mixtec communities to the Aztec Triple Alliance. Teposcolula-Yucundaa is among the conquered kingdoms shown along the left margin and is represented by its Nahuatl toponym (place glyph) of a copper axe embedded in a hill. A Spanish gloss written above the toponym reads "tepuzculula." For more information, see the Essential Codex Mendoza by Frances Berdan and Patricia Rieff Anawalt. 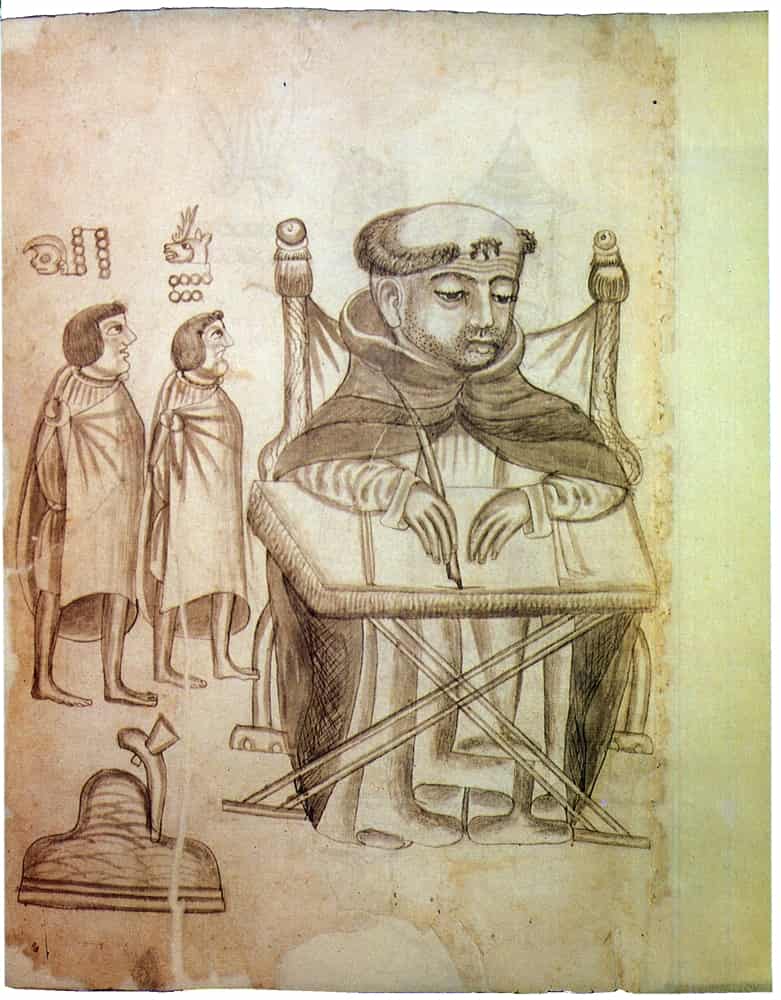 Figure 4. Codex Yanhuitlán, plate 19, depicting the proceedings of an inquisition trial that took place at Teposcolula-Yucundaa from 1544-1546 against don Domingo de Guzmán, the native lord of the neighboring Mixtec community of Yanhuitlán. Illustrated ca. 1550, this page shows the Mixtec nobles 7 Deer and 10 Monkey giving testimony to Fray Domingo de Santa Maria, vicar of Teposcolula. The toponym for Teposcolula-Yucundaa appears in the lower left corner. The creation of this document and the depicted events took place at the same time or within a few years of the cocoliztli epidemic.

Implications for the interpretation of our findings and the 1545 cocoliztli

The second major epidemic to affect Mexico in the 16th century, the focus of our study, occurred between AD 1545-1550 and was called ‘huey cocoliztli’ in Nahuatl, which translates to ‘great pestilence’ (Figure 5). Given its scope, this epidemic is better described as a pandemic, and it heavily affected Mexico’s population as a whole. Mixtec and Aztec populations, as well as numerous other cultural groups in Mexico are known or presumed to have been affected by the 1545 epidemic, including the Maya who were largely outside the scope of the Aztec empire. In this sense it is not incorrect to associate a potential cause of the 1545 cocoliztli epidemic with the Aztecs; however, it vastly overextends and generalizes the findings of our paper, which focus on a single Mixtec community.

Figure 5. Depictions of the 1545-1550 cocoliztli epidemic in 16th century indigenous documents. (a) Codex en Cruz, (b) Codex Mexicanus, (c) Codex Aubin, (d) Tira de Tepechpan, (e) Codex Telleriano-Remensis. All of the images depict bleeding from the face (or the vomiting of blood), with the exception of the Codex Telleriano-Remensis, which shows a stack of shrouded corpses. All images were re-drawn by Annette Günzel. This figure appears as Supplementary Figure 10 in our paper.

There is a rich literature exploring different hypotheses on the pathogenic causes of the 1545 cocoliztli epidemic. Most of these rely on modern medical interpretations of the documented symptoms (see our Supplementary Information, pp. 19-25). For the first time, we present ancient molecular data to add to the discussion, where S. enterica Paratyphi C was the only pathogen we could detect via our methods. While these data demonstrate the presence of S. enterica Paratyphi C (enteric fever) at Teposcolula-Yucundaa during the 1545 epidemic, we cannot comment on its presence in other places around Mexico or whether it was the sole cause of the epidemic. Our detection method was limited to bacteria and DNA viruses, which represent a subset of pathogenic organisms capable of epidemic mortality. Another concept that is gaining attention is the action of several concurrent pathogens in an epidemic episode. For example, most people that died during the 1918 influenza pandemic did so after developing pneumonia as a secondary infection. The fact that S. enterica Paratyphi C DNA was recovered from teeth suggests that the infection was septic, but it is possible other pathogens were also co-circulating at Teposcolula-Yucundaa during the 1545 epidemic, and advancements in molecular analyses may one day reveal them.

However, with data only obtained from a single Mixtec site, we simply do not know which pathogen(s) contributed to Aztec deaths during the 1545 cocoliztli. Using Aztecs as a proxy for Mixtecs and the indigenous Mexican population as a whole is a simplification that obscures the cultural complexity of indigenous Mexico and muddles scientific discussions of the 1545 epidemic. 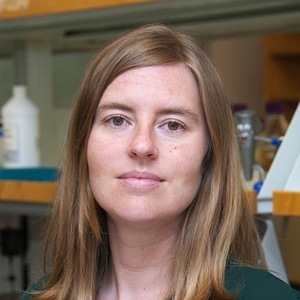 Christina Warinner over 2 years ago

Also, for interested children and parents: please check out our "Adventures in Archaeological Science" coloring book that includes our research on the cocoliztli epidemic. The coloring book is available in English, Spanish, and Nahuatl, as well as additional languages. http://christinawarinner.com/outreach/children/adventures-in-archaeological-science/