I have seen numerous feathered dinosaur fossils over the last two decades, but I was still shocked by the beautiful feather preservation of the Caihong juji type specimen when I first saw it in the Liaoning Paleontological Museum in Shenyang, China.

The paper in Nature Communications is here: http://go.nature.com/2DWAg4B

I have seen numerous feathered dinosaur fossils over the last two decades, but I was still shocked by the beautiful feather preservation of the Caihong juji type specimen when I first saw it in the Liaoning Paleontological Museum in Shenyang, China.

Feathers of various types cover the whole body of this pheasant-sized dinosaur, and at the first glance, this dinosaur appears to have nearly identical plumage to Anchiornis huxleyi, a similarly-sized dinosaur we reported a few years ago. For example, feathers cover the whole leg, even all of the toes, a feature rare in modern birds. However, close examination reveals a striking difference: Caihong juji has asymmetrical tail feathers i.e. with vanes of different widths on either side of the feather shaft, unlike the symmetrical ones in Anchiornis huxleyi.

Alternatively, the presence of asymmetry in Caihong juji is related to display or communication rather than flight, though personally i think it is less likely. However, recent evidence does suggest that signaling plays an important role in feather evolution. For example, Epidexipteryx hui, a bizarre dinosaur we reported a few years ago, possesses highly specialized ribbon-like tail feathers, which probably functioned as display structures. Although the signaling hypothesis for asymmetrical feathers is hard to test, there is micro-structural evidence from Caihong’s feathers supporting the signaling inference.

Using a scanning electronic microscope or SEM as well as other methods, we were able to observe fossil melanosomes — microscopic organelles containing pigments which are responsible for the colour of our skin and eyes — in Caihong’s feathers. Comparisons with melanosomes found in living birds revealed that they most closely resembled those in the iridescent, rainbow-colored feathers of hummingbirds. Iridescent coloration is normally linked to sexual selection and signaling, and therefore the new discovery provides further evidence for an important role of signaling in early feather evolution. 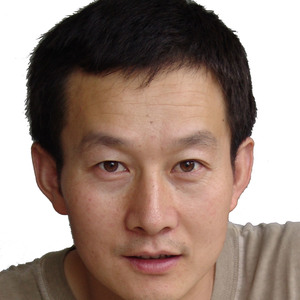