Ancient balancing selection in a bacterium

We discovered that locally adaptive variation that impacts the function of the specialized nitrogen-fixing cell of the multicellular cyanobacterium Fischerella thermalis has a surprisingly long history.

The paper in Nature Ecology & Evolution is here: http://go.nature.com/2DiOSLf

Bacteria have an amazing ability to rapidly adapt to environmental change. During an outbreak of a human pathogen, antibiotic resistance may independently evolve multiple times yet quickly be lost from a population in the absence of selection. These concerning observations within the public health arena are reinforced by decades of experiments with laboratory-evolved bacterial populations. Together, they have shaped both the popular perception and scientific view that bacteria predominantly evolve by recent, repeatable and transient innovation. Accordingly, there are few examples in bacteria of the maintenance of genetic variation by selection (i.e., balancing selection), and our observation of the persistence of a polymorphism for tens of millions of years is surprising.

We didn’t set out to look for ancient balancing selection. The original idea for the paper was to begin to tease apart the genetic basis for locally adaptive differences in temperature performance that we had previously reported within a population of the multicellular cyanobacterium Fischerella thermalis distributed along a thermal gradient at White Creek, a nitrogen-limited, geothermally-heated stream in Yellowstone National Park. Our first goal was to take a population genomics approach to identify candidate genes associated with ecological variation in the population.  We found that a number of genes that are differentiated between upstream and downstream members of the White Creek population are involved in the development and function of the heterocyst, the oxygen-sensitive, nitrogen-fixing cell produced by F. thermalis when starved for nitrogen.

We were excited by this result and wanted to better understand the phenotypic consequences of variation in heterocyst architecture genes in a spatially-variable environment. To link genotype and phenotype, we focused on a gene content polymorphism within a cluster of co-expressed genes that remodels the heterocyst cell surface to restrict oxygen entry. We predicted that the derived two-gene deletion allele increases gas diffusion into the heterocyst. Because we can’t yet genetically manipulate F. thermalis (we’ve tried … and then tried some more!), we used the model cyanobacterium Anabaena PCC 7120, which has the same genetic architecture in this region of the genome. We found that the ancestral and deletion alleles do vary in heterocyst gas permeability in the predicted manner and propose that spatial variation in environmental temperature favors alternative F. thermalis alleles due to thermodynamic effects on heterocyst physiology.

Along the way, we became interested in the origins of the polymorphism itself. To get at this, we turned to my Ph.D. advisor, Dick Castenholz, of the University of Oregon. Dick is a globetrotter who has acquired an impressive collection of F. thermalis strains from geothermal environments around the world. With genome data for a sample of strains from his collection, we were able to trace the origins of the polymorphism to the base of the F. thermalis radiation, some tens of millions of years ago. Microbial populations are often extremely diverse, particularly with respect to gene content within individual genomes. Our study raises the question of whether ancient balancing selection may play a more important role in the maintenance and distribution of this diversity than previously recognized. 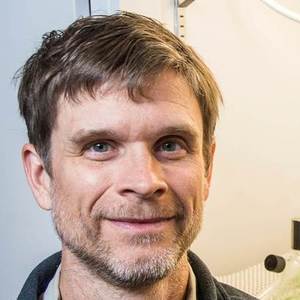