A new predatory dinosaur from Mongolia shows an unexpected body plan, and reveals an amphibious lineage within the closest relatives of birds.

The paper in Nature is here: http://go.nature.com/2iWAcZf

An intriguing paradox of the Mesozoic Era is that the dinosaurs, so successful on all continents, never conquered the seas.

Palaeontologists have never excluded that dinosaurs were able to swim1-3. Yet, it is remarkable that not a single dinosaur shows the adaptations to a fully-aquatic lifestyle that we observe in many other Mesozoic reptiles, from crocodylomorphs to mosasaurs, from ichthyosaurs to plesiosaurs4. In particular, dinosaurs never evolved fins, or paddle-like limbs5, and were consistently constrained to a terrestrial locomotory style.

The last sentence is not completely true. We know a dinosaur lineage that successfully adapted to a new locomotory style - flight - and then generated a huge radiation of swimming species: the birds. The great radiation of aquatic birds exacerbates the paradoxical absence of aquatic forms among the other dinosaurs. Even assuming that most dinosaurs were able to swim and some were fish-eaters6, the evidence supporting amphibious or aquatic habits has been shown to be ambiguous, and is still debated.

This week, we introduced a new dinosaur with an unexpected combination of aquatic adaptations7.

Named Halszkaraptor escuilliei, this small (less than 1 meter long) and very bird-like predatory dinosaur (Figure 1) was poached from a fossil locality in southern Mongolia, and resided in private collections for an unknown amount of time. In 2015, the specimen was transferred to the Royal Belgian Institute of Natural Sciences (RBINS) in Brussels, in the scope of the official return to the Mongolian palaeontological heritage. Given the unexpected morphology of the skeleton, and the controversial history of the specimen, we carefully ascertained the integrity of this fossil using a multi-resolution tomographic scanning methodology, performed at the European Synchroton Radiation Facility (ESRF) in Grenoble. The synchrotron scanning confirmed the integrity of the specimen, and revealed several details of its unique anatomy, still hidden inside the rock matrix.

The skull of Halszkaraptor is very bird-like. The snout is flattened and elongate, and the bony nostrils are retracted back from the snout tip. The latter bears an unusually high number of teeth, and is throughout penetrated by a complex neurovascular network8. The neck is hyper-elongate, and recalls those of swans. In the upper limb, all bones are relatively shortened and flattened, and the hand shows progressive elongation of the lateral fingers. All these features, unusual for "typical" predatory dinosaurs, are widespread among birds and reptiles adapted to an aquatic lifestyle. In the hip and hind leg, hypertrophied muscular attachment sites are analogous to those of modern birds, and may represent postural adaptations counterbalancing the long neck9. This bizarre mosaic of adaptations was combined with a specialized "killer claw" in the foot, similar to that of the iconic Velociraptor10 (Figure 2).

Our study indicates that Halszkaraptor belongs to a new lineage of bird-like dinosaurs, which also includes two other poorly known and enigmatic dinosaurs from Mongolia. This new lineage is nested near the root of the dromaeosaurid group that includes Velociraptor10. We named this new clade Halszkaraptorinae.

We concluded that these small, "swan-like" dinosaurs (Figure 3) acquired an ambush predatory style relying on the long neck for feeding, and a bi-modular locomotory style: obligate biped on land, and "forelimb-assisted" swimmer in water.

This unique and unexpected ecomorphology vividly illustrates how much of the dinosaur world has yet to be discovered. 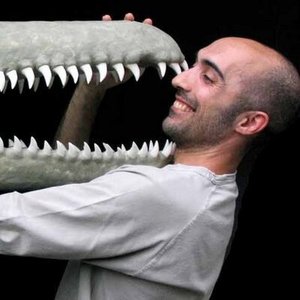