The McMurdo Dry Valleys are the largest ice-free area of Antarctica, and they host robust communities in their cold soils, intermittent streams, and ice-covered lakes. We have been studying this ecosystem since 1993, and our long-term data provide unique perspective on the resistance and resilience of this ecosystem.

The paper in Nature Ecology & Evolution is here: http://go.nature.com/2vcJpQs

For over two decades, the McMurdo Dry Valleys Long-Term Ecological Research (MCM LTER) project has conducted cutting-edge ecosystem research and monitored the ecosystem states and processes of our site, a polar desert in Antarctica. All Long-Term Ecological Research projects funded by the US National Science Foundation have this general mission, with the goal of developing new, fundamental contributions to ecology, tested across many biomes. Whereas most LTER sites are located in the continental US, several are more distant (including two in Antarctica - MCM and the Palmer LTER project, located across the continent on the Antarctic Peninsula), increasing the need for logistical support to reach and conduct research at these sites.

In our case, the US Antarctic Program supports 31 of our scientists to deploy to the Dry Valleys each season (October-February).  Our science team is composed of students, postdocs, technicians, and principal investigators.  Everyone who participates must contribute to both the monitoring and science plans for each season.  The first season of the MCM LTER was 1994-95, though many of the founding PIs had previous research experience in Antarctica.  Our research team is interdisciplinary - made up of limnologists, evolutionary ecologists, community ecologists, microbial ecologists, hydrologists, and environmental historians. Our diversity provides opportunities to study and understand our ecosystem from many different angles.  Ultimately, the outcome of our science is much greater than the simple sum of the parts.

Our core data sets include several that are collected by automated systems that run continuously (meteorological stations, stream gauges, lake monitoring stations), and many that require manual sampling (and subsequent analysis) during the austral summer (e.g., stream and lake chemistry, stream and lake biology, stream discharge measurements, soil chemistry and invertebrate abundances). These data sets are useful for assessing the status of the ecosystem over a single year, the changes over any number of years, and when an unusual or unique event occurs, they also inform our understanding of the long-term responses.

Our new paper in Nature Ecology & Evolution is a follow up to a paper that our group published in Nature in 2002, Antarctic climate cooling and terrestrial ecosystem response, by Doran et al. As the title of the 2002 paper implies, we revealed the linkages of ecosystem status and dynamics to a decadal cooling trend. The paper was published in January 2002, and ironically, as if Murphy’s Law was invoked, that was also when we observed the most intense melt season over the regional period of record, which reaches back to 1968.  The intense melt was driven by warm summer temperatures and high solar radiation (a lack of clouds) over a 3-week period.  Permanent lake ice covers thinned, high stream flows scoured algal mats from stream beds, and soils were wetted from melting ice across the landscape. Hence this 'flood year' affected more than just streams and lakes.

Our work is made possible by the excellent support we receive from the US Antarctic Program and their contract support staff.  We are able to access many of our sites and complete more science with helicopter support - an invaluable tool for field research in the Dry Valleys.  We are grateful to everyone in the USAP with whom we have worked for over 2 decades in the Dry Valleys.

This paper in Nature Ecology & Evolution is available at this link. 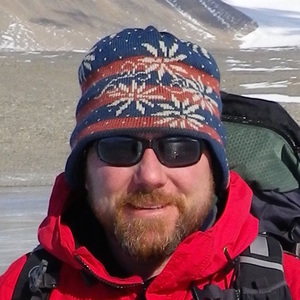 I study the intersections of earth systems and ecosystems in polar and mountain regions of the world. My lab group, colleagues, and I conduct field experiments/monitoring and numerical modeling studies to uncover new knowledge about how natural systems function and how they respond to change.
Follow