The extinction of marine megafauna before humans

We report a previously unrecognized extinction event in the recent geological past that caused the loss of one-third of marine megafauna. The event also impacted the functioning of marine ecosystems. Significant depletion of productive coastal habitats is identified as a likely cause, a hypothesis further supported by the greater susceptibility of energy-demanding homeotherms.

This story starts with a great shark. From modern ecology we know that the extinction of top predators, such as large sharks, may trigger large shifts in ecosystems’ structure and function. For that reason, I have been very interested (actually, obsessed) in better understanding the ecological effects of extinction of the biggest predator that ever lived: Megalodon.

As I tackled this question from different angles, I realized that this was something I could never get to understand by focussing only on a single species, no matter how fascinating it was. At the end of the day, like any other species, Megalodon was part of an ecological community. Its interactions with the environment and other species around at the same time were pivotal to grasp how its disappearance affected marine systems. Our previous research suggests that Megalodon became extinct 2.6 million years ago (Pliocene/Pleistocene boundary) and that its extinction was not directly determined by changes in temperature.

What else became extinct around that time? What were the effects of this extinction (or these extinctions) in marine systems? If not temperature, what caused it?

We aimed to answer these questions by doing a meta-analysis of the fossil record of marine megafauna (large marine vertebrates including sharks, mammals, birds and turtles). We downloaded our data from the Paleobiology Database, an online, public resource that gathers the work of hundreds of palaeontologists that have collected, identified, dated, and described fossil specimens from all over the world. We not only downloaded data from this resource, but we also entered and evaluated records. Accordingly, we only included reliable occurrences.

With the data gathered, we then calculated the rates of extinction during the Cenozoic. We initially used Foote’s Boundary Crossing Method, but we quickly realized that it doesn't account for sampling and preservation biases. Fortunately, the new software PyRate (created by D. Silvestro, one of the co-authors) does, so we used that. The result: extinction rates in the Pliocene (particularly at the end) were much higher than during the rest of the Cenozoic, with 36% of the genera going extinct. Indeed, examples of individual extinctions are well known in the literature (including Megalodon), but this result showed that instead of simply conspicuous background extinctions, these were part of a global event.

So we determined a previously unrecognized extinction event where not only Megalodon, but also many other large marine organisms went extinct. Now, what about the effects? To tackle that question we decided to use a functional approach that has showed to reveal community responses to disturbances. I visited some of the pioneers of this approach in Montpelier, France, to discuss the applicability to our data. It turns out that was very straight forward, and the fact that we had such a large dataset was a big plus because we could easily account for sampling biases and run simulations.

We found that this extinction event had important consequences for marine systems, as functional diversity notably diminished and shifted. In turn, communities were left highly (functionally) vulnerable to future extinctions (like the one we are now facing).

The next question was: what caused the extinction? We explored the role of sea level changes in coastal area availability because it is well known from the literature that the largest eustatic oscillations of the Cenozoic occurred during the Pliocene and Pleistocene epochs, and because we knew from our previous works on Megalodon that temperature changes were not a major determinant.

We therefore estimated the changes in coastal area given the sea level changes that occurred during the Pliocene and Pleistocene and found that from the Pliocene onwards, it significantly dropped and then massively fluctuated. In parallel to these analyses, we tested the predictors of extinction using GLMs, and found that animals capable of regulating their internal temperature, at least at some degree, were more prone to go extinct. We interpreted these two results together, and proposed that habitat loss resulting from sea level changes played a key role in the extinction of marine megafauna during the Pliocene, particularly affecting the animals that needed larger amount of resources to maintain their metabolic demands.

In this study we found that Megalodon’s extinction was part of a global event that affected marine megafauna. This event was likely triggered by a reduction of coastal habitats, and particularly affected those that needed more resources to maintain their metabolic demands. Based on this results, we can speculate that thermoregulation determine survival when habitat is being lost. But, how does it relate with other traits associated with extinction?

The paper in Nature Ecology & Evolution is here: http://go.nature.com/2rvxpp0 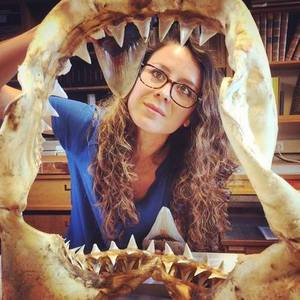