Discoveries are sometimes driven by a string of lucky chances. This is how we found fungus-like fossils deeper in rock and time than we would have thought possible.

For me it started in 2001, when I received an e-mail from Birger Rasmussen in Perth. I didn’t know him personally but had been impressed by his innovative work on radiometric dating of sedimentary rocks. Birger wrote that he had just had a manuscript about very early animal trace fossils rejected by the journal Nature. Three referees had trashed it, but one had at least tried to be constructive, and he had a hunch that it was me. So would I like to come to Australia and collaborate with him in the study of the fossils?

His hunch was correct: it was me. He also correctly guessed that I could not resist the challenge to work on the fossils. Thus began years of joyous collaboration on the Stirling Range biota, resulting in several publications (Rasmussen et al., 2002, 2004; Bengtson et al., 2007) and the main conclusion that there were motile multicellular organisms on the seafloor some two billion years ago, more than a billion years before the oldest known fossil animal. Few of our colleagues liked the conclusion, though we never claimed that the trace makers were animals, but so far no-one has offered any better interpretation of the fossils. 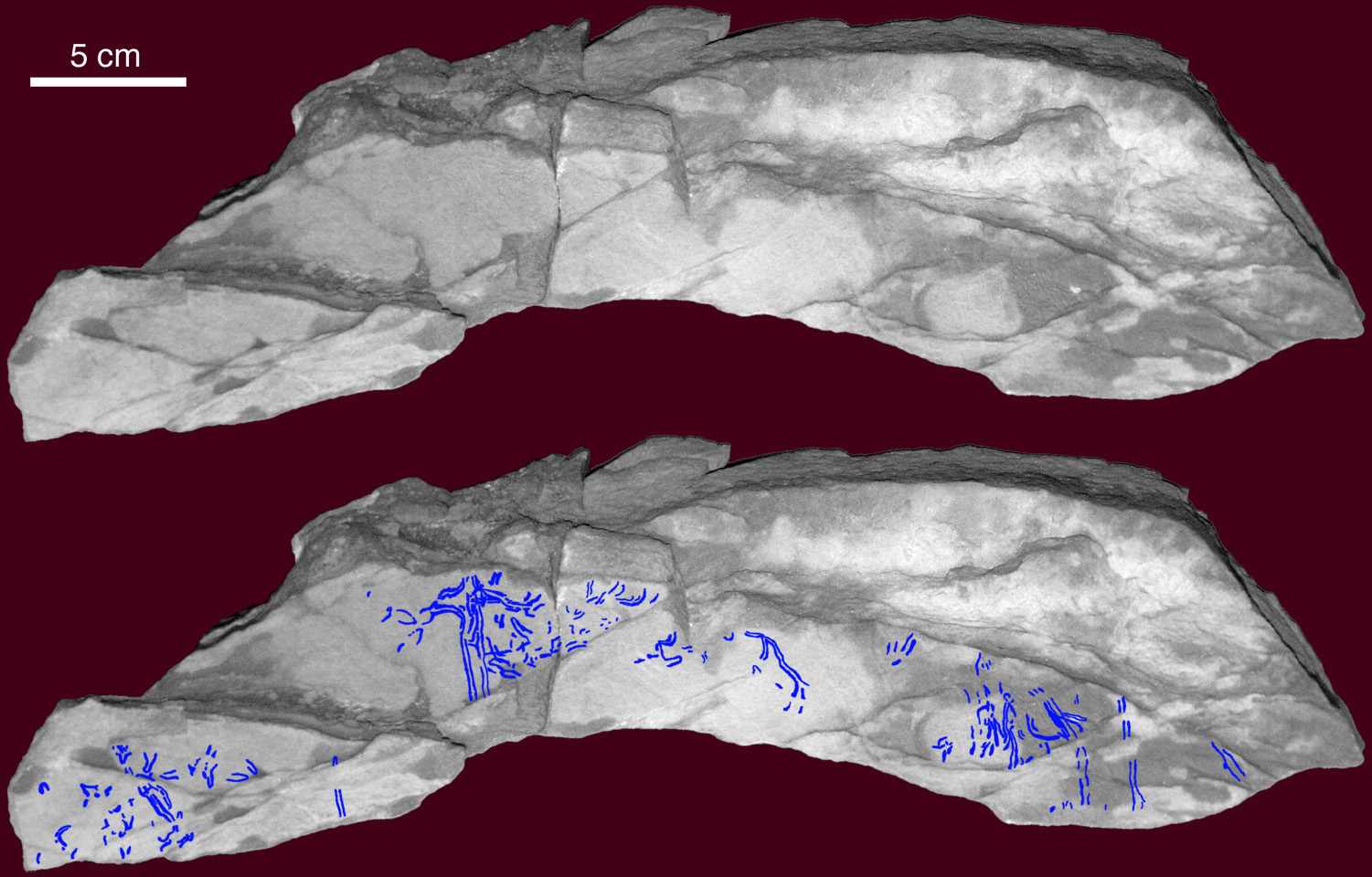 Stirling Range trace fossils found on the soles of sandstone beds. In the lower image, the traces have been outlined in blue. After Bengtson et al. 2007.


Birger’s and my paths didn’t cross again for a while after that adventure, though we kept in sporadic contact. In the meantime I teamed up with Magnus Ivarsson, who had just concluded a Ph.D. project on fossil microbes of the "deep biosphere”, the immense but poorly known biota hidden in pores and cracks hundreds to thousands of metres deep in rock. Magnus had found fossil mycelia of filamentous fungi in 48 million-year-old basalts in the northern Pacific Ocean (Ivarsson et al., 2012). Basalts are the remains of lava flows, and when lavas erupt on the seafloor they cool rapidly into an almost foamy texture. The bubbles remain open for millions of years and provide a haven for colonizing microbes. This is where Magnus’ fungi lived before they became fossilized. We could also show how the fungi lived in symbiotic association with bacteria-like organisms that were using chemically stored energy (in the absence of light for photosynthesis) to produce organic matter (Bengtson et al., 2014; Ivarsson et al., 2015). 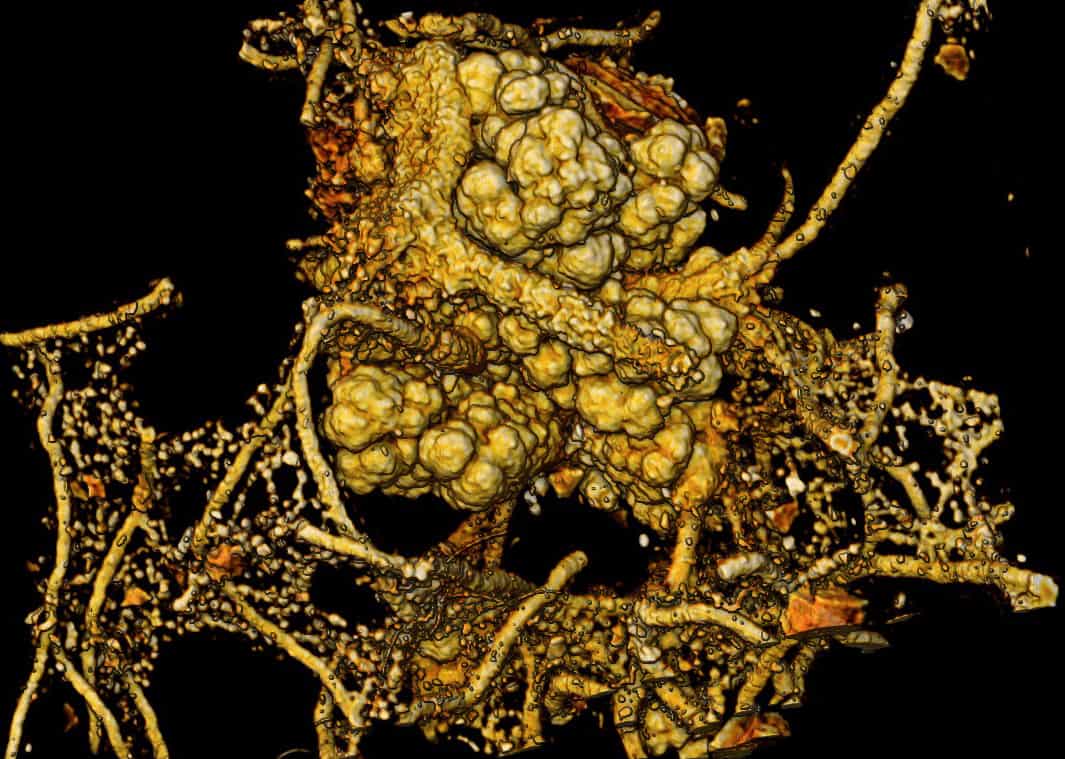 
Fossils may thus inspire searches for fungi in the modern deep biosphere, and biologists are now looking for genetic markers of fungi in deep rock. But we may also use the 48 million-year-old finds as search images for more ancient deep life, as bubbly lavas have formed on Earth since the beginning of rock formation more than four billion years ago. This might even be the right environment to look for the last common ancestor of all life. We decided to go look in the really old rocks.

At that moment my mailbox went pling. It was Birger: “I hope you are well and apologize for not keeping in touch. I met a colleague of yours at the Florence Goldschmidt - Magnus Ivarsson, who had an excellent poster on fossilized fungi in seafloor basalts. I have recently found filamentous structures in Proterozoic basalts which seem quite similar to those you have been studying. I will be in Stockholm on Thursday and was wondering whether you had time for a chat? Be great to see you again.”

Thus began the new chapter in our cooperation, and the intitial result is what you see in the now published article. We used X-ray tomographic microscopy to disentangle the mycelium-like structure in three dimensions, and we applied X-ray microanalyses and Raman spectrometry to characterize the mineralization sequence within the filament-containing bubbles and to determine the temperatures of crystallization. We were able to demonstrate that the filaments were indeed fossils of cavity-dwelling organisms and that they had colonized the vesicles and cracks in the cooling lava not long after eruption 2.4 billion years ago. We concluded that fungus-like fossils in the deep biosphere go back to at least 2.4 billion years, much further back than fungi are conventionally thought to have existed. Porous crustal rocks seem to provide a safe haven for deep-living organisms over eons of time, and these environments provide excellent conditions for fossil preservation.

The Earth is 4.6 billion years old. How far back in time can we go with this kind of biota? We continue searching and hope to inspire others to do the same. Stay tuned.

The paper in Nature Ecology & Evolution is here: http://go.nature.com/2o2zElS