Ladybird books have sustained several generations of young readers. Now that most of those readers are adults, they have branched out into books aimed at the grown-up market. While many of these have been humorous, Ladybird Experts attempt to explain three serious scientific topics for the lay adult: Evolution, Climate Change and Quantum Mechanics. I teamed up with the chief editors of Nature Climate Change and Nature Physics to review the trilogy.

‘One long argument’ is how Darwin referred to the Origin of Species, the book that well-known populariser of genetics and evolution Steve Jones takes as his starting point for his Ladybird guide. It’s the obvious place to start, and one that many have used before, including Jones himself in About a Whale. But does it actually work? This Ladybird guide has some great moments in it, but ironically it fails for me to have the logical continuity of one long argument.

Jones is a very successful newspaper columnist, and in many ways the book reads like a series of short, erudite columns. Some of the pages, such as those on convergent evolution, the blindness of evolution, and sexual selection, are well-crafted gems of science communication. Other pages have the feel of a slightly meandering vignette rather than a definitive guide to the topic, such as starting with there being hippopotamus fossils in the Himalayas as a hook for discussing the evolution of whales. In some cases, one wonders if the target audience is too close to the readership of the British Daily Telegraph, with comments such as the fact that Jones’s students ‘now affect a half-cockney accent that must horrify their grandparents’.

There’s certainly nothing wrong with the science, and many of the examples are well chosen, if not surprisingly novel. Antibiotic resistance gets a page, as do artificial selection, continental drift and feathered dinosaurs. I wonder if the one-concept-per-page format of Ladybird books makes it difficult to do justice to some of the deeper ideas, such as speciation itself. For that one, I feel Jones has just about got started with a nice analogy for the fluidity of the species concept when it is time to move on, without really discussing current thinking on speciation mechanisms. Conversely, on another page, it’s probably too much to try to cover genetic bottlenecks, vicariance and island biogeography in one shot.

Ladybird books are known for a particular style of mid-twentieth century illustration, and this volume is no exception. On the whole, these work well and will appeal to a readership who grew up with such books. The artificial selection of brassicas, the evolution of whales, and human skin colour variation are some of my favourite examples. I’m not quite so sure it works when the illustrations are supposed to be humorous, such as George H. W. Bush looking angry about eating his greens, or a hammer and sickle as the backdrop for the work of Belyaev.

There are some in-jokes for scientists as well, such as ‘molecular evolution is no more than comparative anatomy plus a lot of money’ and ‘if you want honesty, try physics instead’, and for this reason I suspect most of us who work in evolutionary biology will enjoy a quick read through the book. Fundamentally, though, I’m not sure it packs the explanatory punch to be the definitive short guide for the lay reader. Perhaps it would have been better to frame the strong central chapters with some basic genetics and natural selection at the beginning and the historical comparison with Darwin left until the end. That said, if every adult spent just half an hour with this book, scientific literacy would undoubtedly be improved. 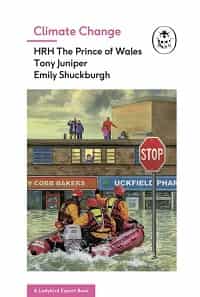 The Ladybird Expert Climate Change has received the most media attention of the three books and it’s the authorship team, or more specifically one particular author that is drawing the attention. His Royal Highness Prince Charles authors the book (and has the biggest biography listed) along with Tony Juniper, an environmentalist and writer, and Emily Shuckburgh, a climate scientist at the British Antarctic Survey. There is a forenote from Prince Charles which discusses how the book came out of a discussion with a friend after his opening address the 2015 Paris UN Climate meeting, about the lack of a plain English guide to climate change.

The book is also the only one that clearly states it has been peer-reviewed, conducted by The Royal Meteorological Society, with the Review Editor and Reviewers listed inside the back cover. I can’t help but wonder if this is due not only to the ‘newness’ of climate change research, compared to Evolution and Quantum Mechanics, but has been done conscious of the strong opinions surrounding the issue in the wider community and the conflicting information that is readily available online.

The book follows the Ladybird-style of short sections, each a single page, starting with how the climate is changing and impacts, with examples presented that cover diverse regions – this is refreshing to see as it highlights the global nature of the issue and makes the book more inclusive and non-region specific. It moves on to discuss climate over the distant past and how the current climate change is different, including discussion of sources and sinks of carbon and the drivers of emissions. The benefits of the 1.5C warming target are introduced, followed by a section on solutions, which is a great addition to the standard science discussion. The final page “One Earth”, along with the final section discussing solutions, is a call to action, although I found it slightly over the top – ‘we have the power to put her [the planet] on life support, and we must surely start the emergency procedures without further procrastination” – even if the right sentiment is there.

The illustrations are in the standard Ladybird style, however in the occasional figure there is data included, in the form of graphs – global surface temperature since 1850, 800,000 years of carbon dioxide; or numbers/text to illustrate points. These add information, however it doesn’t always fit alongside the more traditional standard illustrations, which also range from the prehistoric with images of woolly mammoths being hunted, to the more recent past - coal miners crawling through tunnels, post-Hurricane Sandy-flooded New York City, and controlling central heating on a smart phone.

The book presents a neat overview of the science on anthropogenic climate change and its impacts which is mostly successful in walking the line between informing and alarming. It offers a good introduction to those unfamiliar with the topic, but may only be picked up by those who already have some knowledge or who are environmentally-minded. For those familiar with climate change research, this book doesn’t offer any surprises, but does offer an enjoyable read. I would definitely recommend to those interested in learning more. 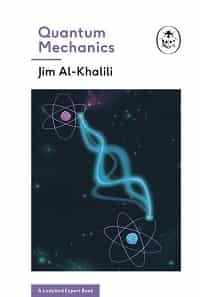 Richard Feynman famously quipped that he was confident nobody really understands quantum mechanics. There are no counterparts, in everyday experience, for concepts such as particle-wave duality and entanglement, so they necessarily appear weird and counterintuitive to the student or reader being introduced to them for the first time. Jim Al-Khalili, a professor of physics at the University of Surrey and renowned populariser or science in newspaper columns, books and on TV screens, does a good job of presenting them in a clear fashion in this concise little book.

Al-Khalili follows what I would call the standard description of quantum mechanics. That is to say he presents its development essentially chronologically, with the principal concepts introduced in their historical context, such that the reader can appreciate how they came about. A consequence of this approach is that at each historical turn, the ‘weirdness’ and counterintuitive nature of quantum theory is emphasised.

We therefore hear the usual story that as the 19th century came to an end, physics was largely considered complete, except for a few niggling problems here and there. We learn that Max Planck’s proposal that radiation emanating from hot bodies could only take on specific, quantised energy values was initially just seen as a neat mathematical trick, but ultimately revolutionized out understanding of the subatomic realm. And we find out about the various contributions made along the way by pioneers such as Erwin Schrödinger, Werner Heisenberg, Wolfgang Pauli and Niels Bohr.

There is nothing wrong with this approach, especially since each ‘chapter’ of the book is no longer than three of four paragraphs – this makes for an exceptionally clear and concise exposition. But I can’t help but wonder if this isn’t a missed opportunity to present quantum mechanics using a different playbook. Certain chapters – for example the ones on entanglement (“Einstein refused to believe it, calling it ‘spooky action’!”) and quantum field theory (essentially an excuse to mention Richard Feynman and his eponymous diagrams) – feel like they are going through the motions. On the other hand, when Al-Khalili moves away from the beaten path of the standard description of quantum mechanics, for example when he describes its various uses in technologies ranging from DVD players to MRI scanners, he is far more engaging.

This brings me to the one, admittedly entirely subjective, aspect of the book I just didn’t like: the figures. Clearly, the retro 1950s look may appeal to some readers – if nothing else it is reminiscent of the original Ladybird books from years gone by – but I somehow struggled to square a discussion on quantum computing with an image a fridge that could have come off the set of Mad Men. Perhaps less flippantly, it seems to me that imposing a style that is so clearly of one decade to a topic that developed over the course of the entire 20th Century (and beyond!) is a little jarring.

This minor quibble aside, Al-Khalili has presented a very readable introduction to the topic of quantum mechanics. I struggle to imagine what more one could want from a primer on the subject – I may just lend my copy to my friends at Nature Ecology & Evolution!

Patrick joined Nature Publishing Group in 2005 as an Assistant Editor at Nature Reviews Genetics and Nature Reviews Cancer. In 2008 he moved to Nature, where he served as Senior Editor covering ecology and evolution, before becoming Chief Editor of Nature Ecology & Evolution in 2016. He has handled primary manuscripts and review articles across the entire breadth of ecology and evolution, as well as advising and writing for other sections of Nature. Patrick has a degree in genetics from the University of Cambridge, did his DPhil in experimental evolution at the University of Oxford, and did postdoctoral work on evolutionary and ecological genetics at University College London in association with Imperial College London at Silwood Park.

China’s campaign for territorial spaces: How to eliminate the ideas of planned economy in next?
Contributor
News and Opinion

David Lamb
Double blind peer review for all?
Editor
News and Opinion, About the community

Double blind peer review for all?

David Lamb
Nature Research Ecology & Evolution Community
We use cookies to help improve your experience. By continuing to browse our website you are consenting to our use of cookies.
Learn more