Compared to other mammals, primates exhibit extraordinarily large brains. Why and how did these large brains come to be? For the past 20 years, the social brain hypothesis has been the prevailing explanation, suggesting that big brains evolved in some species to facilitate complex social interactions. Before this idea became popular, however, many scientists believed that higher quality, harder-to-find foods were responsible for the evolution large brains. Our new study resurrects these older ideas - differences in diet, but not sociality, explain differences in brain size between primate species.

A mouse lemur’s brain weighs less than 2 grams – about the same as 5-6 raisins. On the other end of the spectrum, chimpanzees, our closest living relatives, have brains up to 450 grams – about equal to 3-4 apples. Our incredible brains take the cake, coming in at a whopping 1,300-1,400 grams! What could possibly explain this incredible variation? Over the past few decades, the prevailing idea has been that increased social complexity is what drives primate brains to become larger – an idea called the social brain hypothesis. But our new paper in Nature Ecology and Evolution shows that this may not be the case; rather, primate species with higher quality diets, which include fruit and/or animal protein, have larger brains than those with low quality diets, which are comprised mostly of leaves. 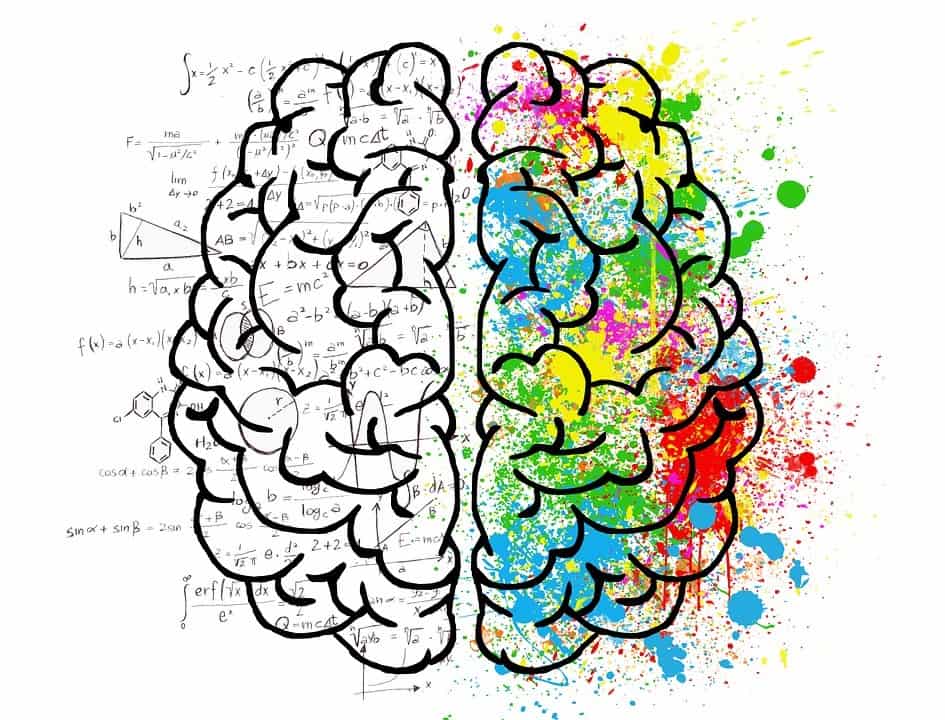 I first learned about the social brain hypothesis in undergraduate classes at NYU (taught by none other than my advisors and co-authors, Dr. James Higham and Dr. Scott Williams), and I was convinced! Take a look at the figures below. The one on the left clearly shows a positive relationship between the average group size of a species – a measure of social complexity – and neocortex ratio. The one on the right shows no relationship between the percent of fruit in the diet – a measure of diet quality – and neocortex ratio (Dunbar 1992, 1998). And if you’re wondering what the ‘neocortex ratio’ is, it’s the ratio of the size of the neocortex – a brain region associated with information processing, memory, and learning – to the size of the rest of the brain. Later studies by the same authors also found a positive relationship between mean group size and relative brain size, so I was satisfied with the idea that differences in social complexity explained differences in both relative neocortex and relative brain size (Shultz & Dunbar 2007).

I didn’t think about these ideas again until I returned to NYU for my first semester as a PhD student. I was both surprised and elated to find myself back at my alma mater, since my undergraduate degree in Economics led me to a brief stint on Wall Street (eek!), during which I realized the science nerd in me felt utterly unfulfilled. I had always been interested in the underlying causes of neurological disorders, and how the rapid evolution of our large brains may have contributed to their existence. And since many neurological disorders are sex-biased, occurring more often in either men or women, I also wanted to understand how and why sex differences in the brain evolved. This is now the focus of my dissertation.

When I first delved into my PhD, I was aware that sex differences within species (for example, differences in body size) can usually be explained by sexual selection, a collection of evolutionary mechanisms which lead individuals of the same sex to have differential reproductive success and/or increase offspring fitness. This occurs via intra-sexual (mate competition) or inter-sexual (mate choice) selection. Since sexual selection pressures differ across various mating/social systems, I wanted to see if there was any evidence that primate brain size was affected by different mating systems and, therefore, sexual selection. What I found was surprising – it appeared that conflicting results had been sitting in the literature for almost a decade. As the figures below demonstrate, one study suggests monogamous species had the largest brains, while another found it was polygynandrous (multi-male multi-female) species. Each claimed to be in line with the social brain hypothesis, since it predicts that species with the most socially complex systems should exhibit the largest relative brain sizes.

As a curious and eager PhD student, I thought I should figure out why these studies didn’t agree. The most obvious problem was that the studies included different species in their analyses. I also noticed that the brain sizes of many, many more species had been collated into large datasets by other researchers. Finally, as I became more familiar with comparative statistical methods, I realized that there were many new methods available. While working on another research project in Puerto Rico, I decided to re-evaluate the relationship between mating/social system and relative brain size, taking into account differences in diet and phylogenetic history (i.e. the evolutionary relationships between species). Gathering the data (with the help of my wonderful co-authors!) and running all the different types of analyses was both challenging and fun – and I even got to take a break from coding once in a while to enjoy the view! 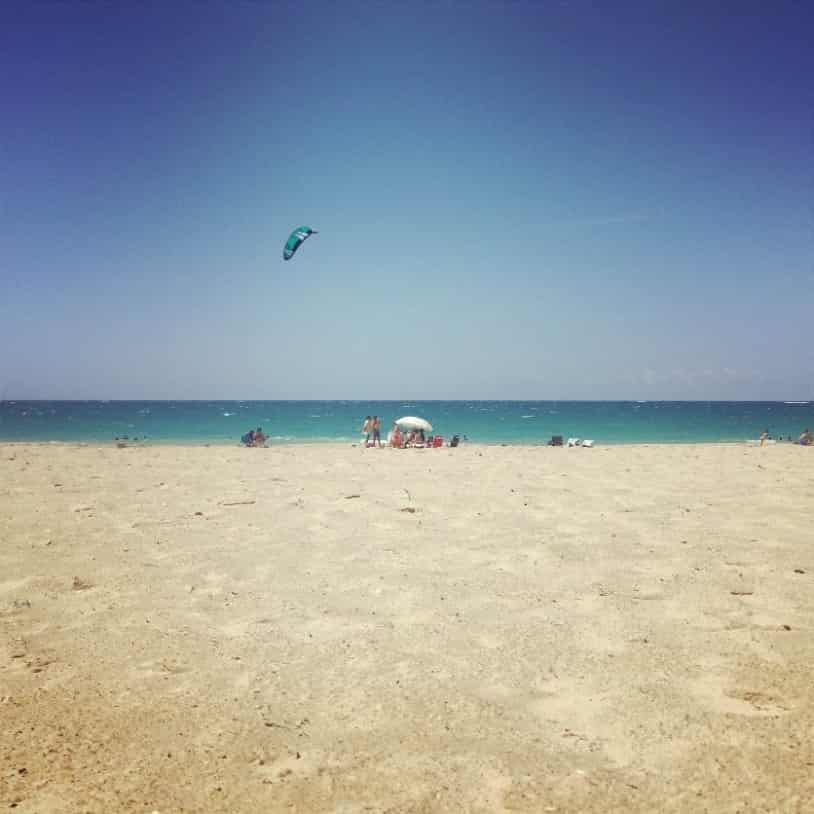 After crunching all the numbers, we were surprised to find that differences in brain size between species are not explained by their mating/social systems. Instead, only body size and diet explain primate brain size variation – larger bodied species have larger brains, and fruit-eating species (a.k.a. frugivores) have larger brains than leaf-eating species (a.k.a. folivores)! These patterns are depicted in the plot below. This suggested to us that other measures of social complexity, namely group size, may not explain brain size variation in this larger sample of species either – and after another round of data collection and analysis, that’s exactly what we found. 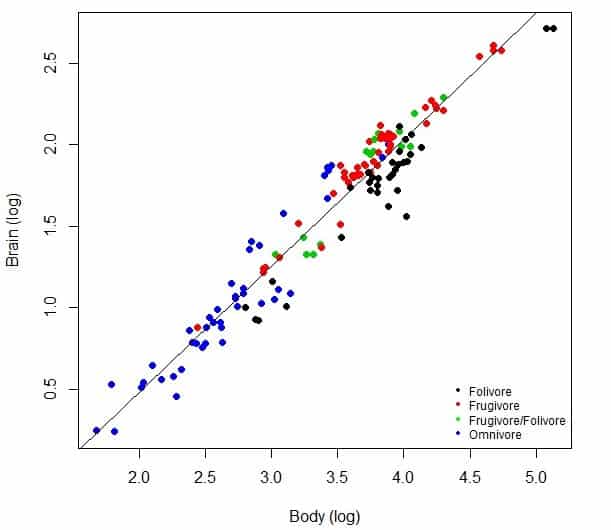 Rather, it appears that the old idea that large brains evolved to increase foraging efficiency in primates (see Clutton-Brock & Harvey 1980) has made a comeback! Since fruit is clumped in time and space, and often requires extraction from protective skins, fruit-eating may require greater cognitive complexity and flexibility than leaf-eating. Furthermore, fruit is a relatively higher quality resource, which could help overcome the energetic constraints of a having larger brain. As for us humans, it’s a bit harder to tease apart what initially drove the evolution of our huge noggins. It’s possible that selection for technological innovation came first, and then those elaborated parts of our brain were subsequently used to facilitate social interaction. One thing remains clear – we humans are strange, big-headed, wonderful primates.

The paper in Nature Ecology & Evolution is here: http://go.nature.com/2neJuNc

Side note: If you haven’t seen the viral pictures of Shaq having the time of his life hanging out with a little mouse lemur, you should definitely have a look right now: https://blogs.scientificamerican.com/a-blog-around-the-clock/shaq-and-the-mini-shaq-the-extreme-primates/

Adolf Heschl over 3 years ago

Congratulation for the interesting paper. I fully agree with the result of your comprehensive analysis because I was never a convinced adherent of the social brain hypothesis which I see as a rather typically human cognitive bias of our world view ("social" is always good). So I hope that your article will provoque a new and more balanced discussion on the intricate interaction between ecological and possible social, i.e. sexual selection factors in cognitive evolution. At the moment I have only 3-4 short questions to you (my special field is self-conscioussness in primates):

1. Many baboon species (Papio sp.) are more successful hunters than even chimpanzees and nevertheless they neither have a larger brain nor self-conscioussness (checked via mirror self-recognition). Based on your results about omnivory shouldn't one expect a different relationship?
2. The same argument holds for the comparison chimpanzee/gorilla. Shouldn't there be a greater difference in brain size?
3. Why didn't you mention Katherine Milton as one of the first researchers who investigated in the field the evolutionary relationship between foraging style and brain size in primates? (howler vs. spider monkey)
4. In your diagram on the phylogenetic relationship between EQ and mean group size, you chose the color red for "low" and blue for "high" (normally, it's the other way round).