Eurasia's Silk Roads define one of the most extensive and ancient economic and social networks. But how did the actual routes evolve and can we independently predict them? Using a combination of old fashioned anthropology and cutting edge geographic modeling and remote sensing, we may have found an answer.

I had been on a horse a total of about 5 times before the age of 24, the kind of 2-3 hour family excursion type rides where docile, aged ponies cart weekender city-kids around a set of beaten trails in a state park for two hours. Afterwards we’d all complain about how much our butts hurt. So when I arrived in rural Kazakhstan in 1999 and local herdsman asked if I could ride with them on their seasonal migration – I naturally answered “of course!” Walking my trusty horse on easy trails across the flat valley bottom was easy enough, but the ascent into steep hill country quickly showed my riding deficiencies. I bobbed and careened in my saddle during the exhausting trek from the ex-Soviet farmstead to highland summer pastures of the Dzhungar Mountains. My annoyed horse toted me up and over steep slopes, open pastures, and rocky, unstable passes. Thus, early in my studies of both modern and ancient pastoralists, I internalized the fact that pastoralist pathways are created by a complex set of ecological, social, and pragmatic considerations. And I had better learn to ride better. 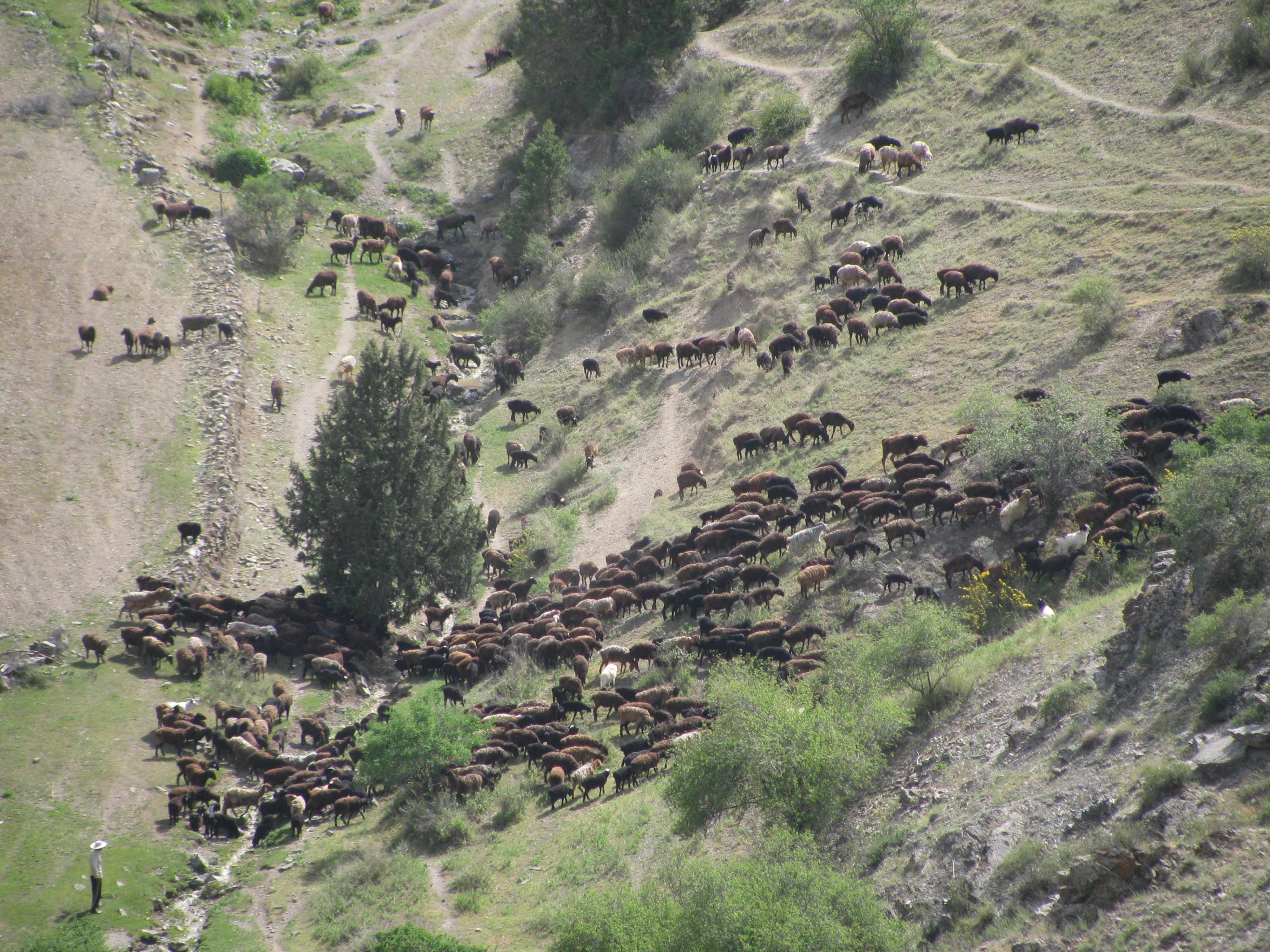 I lived with a small group of Kazakh herders for the remainder of the summer, tending to their 500 head of mixed herds—mostly sheep and goats, but some cattle too. The herders were a cheery bunch and as we developed a rapport they happily described how their mobility patterns reflected a smart-minded solution for getting to their destination (summer campgrounds) while effectively feeding their animals along the way. Their paths hugged the rich pastures as they made their way to summer campgrounds, typically located in beautiful seas of rich highland grass. The herds seemed a happy bunch as well.

In our article entitled “Nomadic ecology shaped the highland geography of Asia’s Silk Roads”, we illustrate how such repeated, seasonal nomadic mobility patterns in the mountains of Inner Asia shaped a cumulative geography of mountain pathways that conforms with and renders the geography of the historical Silk Road. So, what is the Silk Road? Why is it important?

Although a fairly recent term, the “Silk Road” describes one of the world’s most ancient overland trade networks, which spurred the exchange of commodities, ideology, and technology between societies of ancient China and those of the eastern Mediterranean, starting at least 4000 years ago. As complex as it was vast, Silk Road networks infused eastern and western civilization with both materials and concepts: archways, abacuses, bells, ivory, gunpowder, apples, peaches, paper, spices, trousers, teacups, umbrellas—and of course silk – moving bilaterally across the Eurasian continent.

Hundreds of oasis centers like Xian and Dunhuang (China) and the amazing architectural cities of Samarkand, Shiraz, Baghdad, and Damascus define the lowland nodes of this Silk Road network. Yet Silk Road sites in the high mountains of Inner Asia are almost as numerous. In fact, without crossing these imposing mountain zones it would be nearly impossible to link up the major centers in the eastern and western oases. Finding the routes across these mountains has proven elusive. 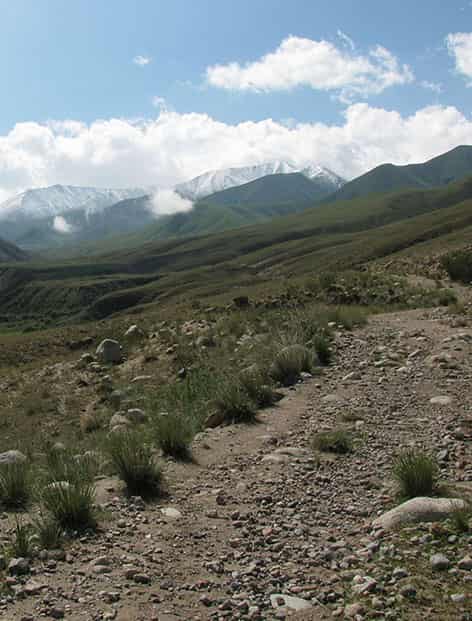 Our best way to map these import mountains tracks has typically been limited to a computation method of “connecting the dots”. Yet this approach relies on the idea that pathways would be energetically optimized for ease of travel, and is limited to known sites. While considering this intellectual problem, my experience clamoring up steep slopes with Inner Asian mountain nomads came to mind: What if we didn’t need the nodes to map the formation of the Silk Roads? Perhaps pathways oriented according to the ways nomads actually move might independently lead us to the Silk Road sites?

To test this premise, my lab team and I drew on a method we used before to understand nomadic ecology and seasonal mobility: spatial modeling with Geographic Information Systems (GIS). We adapted a commonplace hydrological tool in the software, ‘flow accumulation’, typically used to calculate the direction of streams across a landscape, and reworked our calculation parameters to simulate “flows” of herds animals (instead of water) across areas of rich mountain pasture. By trading terrain for the distribution of rich mountain grasslands, we simulated the movement of pastoralist herders across a vast mountain region of Asia. We effectively reclassified vegetative patches using derived vegetation indexes from remotely sensed satellite imagery and calculated the flow accumulation of herders over those elevations where mobile herding adaptations are archaeologically and historically well documented.

The resulting simulation of herding ‘flow accumulations’ showed how a single year’s range of pastoralist mobility would map out across a vast territory of highland Inner Asia when optimized to flow across prime grassy pastures distributed between 750m and 4,000m elevation. Adding variation in the distance and direction of the flows shaped each iteration of the flow model slightly differently, so when we summarized 500 iterations of flow maps, the resulting aggregate map illustrates those flow trajectories that were most commonly used (across all runs of the simulation).

The final step was to compare this ‘500 year’ buffered aggregate of flow pathways with the known highland Silk Road site locations. The result shows that nearly 75% of the sites—caravanserais (caravan hotels), towns, shrines, and mountain passes—fall along those paths we predict as best served to feed animals while moving between highland summer pastures and lowland winter campsites. We argue, that the formation and location of sites that define the most extensive and influential Eurasian trade networks, can be tied to the accumulated herding tracks of mountain nomads.

These ancient channels demonstrate how participation between diverse communities can create vast and economically important networks. Our method and our results suggest that the Silk Roads evolved within open and flexible arenas, promoting an ancient form of globalization that rendered the shared roots of Eurasian civilization.

When I go back to Kazakhstan this summer, I am bringing a better saddle.

The article in Nature is here: http://go.nature.com/2mowtm9 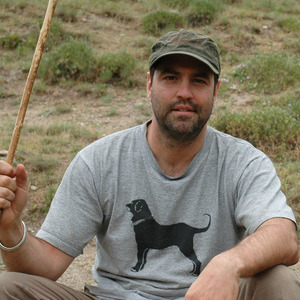