​Living in a variable world

Bridging the gap between empirical evidence and theoretical reasoning

All wild populations face the challenges of an ever-changing environment. In response, natural selection has favoured a variety of “coping strategies” that optimise fitness by shaping the lifetime schedules of survival and reproduction that we call “life history”. Classical and more recent life history theory predicts a variety of demographic strategies that can reduce the impact of environmental variation on fitness. Empirical evidence, however, has to date suggested that one strategy, demographic buffering, dominates in nature. Our paper published recently in Nature Ecology and Evolution uses a large-scale comparative demography approach to close this important gap between theory and evidence. 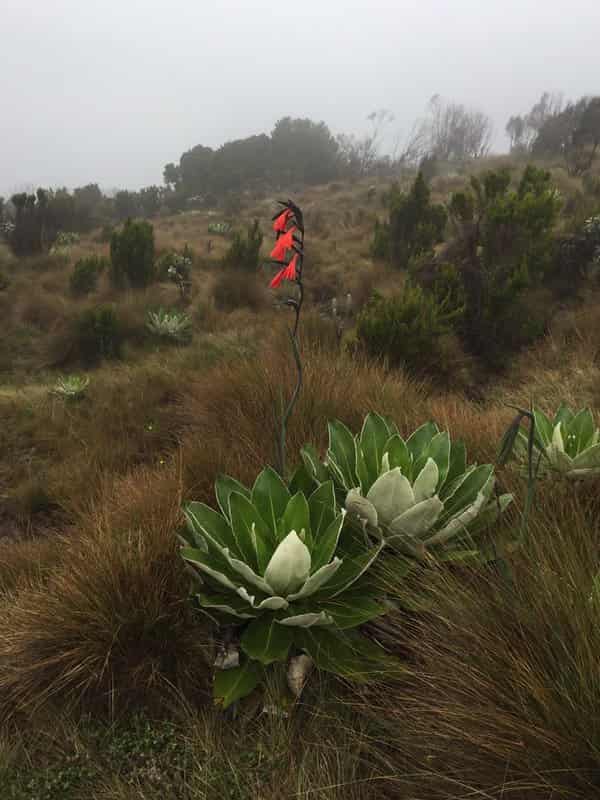 Photo caption: Fragile beauty. We are writing this blog during a field course to Kenya for MSc students of Conservation Science & Policy at the University of Exeter, UK. Mackinder’s gladiolus (Gladiolus watsonioides), a specialist of the alpine zones of Kenya, is much photographed but poorly studied. It epitomises the need to survive and persist in the face of an onslaught of environmental variation: it suffers burns of the surrounding giant heather, and competition between burns; freezing conditions or blazing heat; saturated peatland soils or drought; threat of trampling by tourists or megaherbivores. We have no idea whether this species buffers itself against variation, or rolls with the punches. Perhaps someone could help with funding, to find out? The field site is truly spectacular! Photo credit: Stu Bearhop 2017.

There have been two main coping strategies proposed by theoreticians. First, the demographic buffering hypothesis states organisms should buffer their most influential vital rates against environmental variation. This buffering comes with a tradeoff: not all traits can be buffered, so the least influential vital rates will be left to roll with the environmental punches. Support for the DBH would be yielded by observations of negative correlations between the importance of vital rates (survival, reproduction etc.) to population growth and their variation through time. To date, demographic buffering has been found to exist in many wild animal and plant populations, and to predominate across broad taxonomic groups including plants, reptiles, birds and mammals.

However, theory also suggests that under certain situations, variation can be “good for” fitness. Consequently, the strategy termed demographic lability predicts that for some wild populations it may actually be beneficial for those most important vital rates to have relatively high variability. Demographic lability is a challenge to the perceived wisdom that “variation is bad for fitness”, but to date it has lacked empirical support. Our paper identifies an important issue with how demographic buffering/lability has been studied, statistically. We fix this problem and reveal important evidence for demographic lability in several species spread throughout the plant kingdom.

When we study statistical properties of life histories, we must recognise that vital rates are subject to strong mathematical and statistical constraints. Survival is bounded between zero and one, with a maximum possible variance when probability of survival equals 0.5, which reduces towards the outer bounds. On the other hand rates such as fecundity or recruitment are bounded only below (by zero) and with variance tending to increase with the mean. The biases these cause have previously been discussed, yet their influence on evidence for demographic strategy across populations was largely unknown. We set out to ask what the effects of statistical constraints were on evidence for demographic strategies. Having dealt with statistical artefacts, we reveal a continuum of demographic strategies among plants, from buffering to lability, and consider evolutionary patterns among clades.

This analysis, and the resulting paper, form the core output of a research project funded by the Natural Environment Research Council, called “Are plant life histories really buffered against environmental variation?”. The project started three years ago, initially focussing on the exploration of mean-variance constraints on demographic strategies using random simulations. We then moved on to analysis of empirical populations in conjunction with the 2015 release of COMPADRE, a large scale open access database of empirical plant population matrices. Using this large dataset we were able to explore demographic strategies across a wide variety of wild populations and species of differing growth types and evolutionary history.

By analysing ‘dummy’ populations, simulated using randomly plucked vital rates, we provide artefactual, rather than evolutionary, explanation for the pervasive evidence of demographic buffering. In other words, the mean-variance constraints of the vital rates alone can drive evidence of buffering. However, these constraints can be corrected for by re-scaling the demographic rates to ensure the variance is independent of the mean.

After applying appropriate corrections, across 141 wild plant populations, consisting of 73 unique species, we found variability in demographic strategy. Some populations were still buffered whilst others were labile, removing the skew towards buffering that is observed all too frequently across empirical work.

The journey from exploration of mathematical biases to applications in wild populations brought us to our final conclusion;

Important questions remain. Why are some plant species labile and others buffered? Is strategy determined by the magnitude of environmental variation itself? Is strategy determined by the pace of life? Are labile species weedier or more invasive than buffered species? Although in this paper we explored proxies for environmental and demographic variability we were unable to find any exogenous predictors of lability. This is something we are still exploring in terms of life history and environmental variability.

Photo caption: A new age for demography and life history research. Thanks to many decades of intensive demographic research on an extraordinary diversity of animals and plants, and the hard work of teams of academic volunteers to transfer these data out of peer-reviewed papers and into databases, we can now do comparative demography on a massive scale. The COMPADRE and COMADRE databases are huge and still growing. Most importantly, they are open and collaborative. Google your local mirror site today!

This study would have been impossible without COMPADRE and the authors are indebted to the collaborative approach now adopted by a burgeoning group of demographers. This is an exciting time for demography research, with database resources primed to answer a whole host of ecological and evolutionary questions. The databases are freely available, so all that is required is for collaborative scientists to ask important questions and answer them using the right statistical tools.