Natural selection does a U-turn

This week, Lars Gustafsson and I published a study of long-term changes in selection on ornament size in Nature Ecology & Evolution. The conspicuous white forehead patch of male collared flycatchers (see photo below, taken by Johan Träff), which they use to attract a mate, has been getting smaller over time, both in our study population and others, a phenotypic downsizing that has been linked to climate change. We assessed whether selection on ornament size had changed since 1981, what might explain the reversal in selection we found, and whether an evolutionary response (i.e., genetic change) was evident. 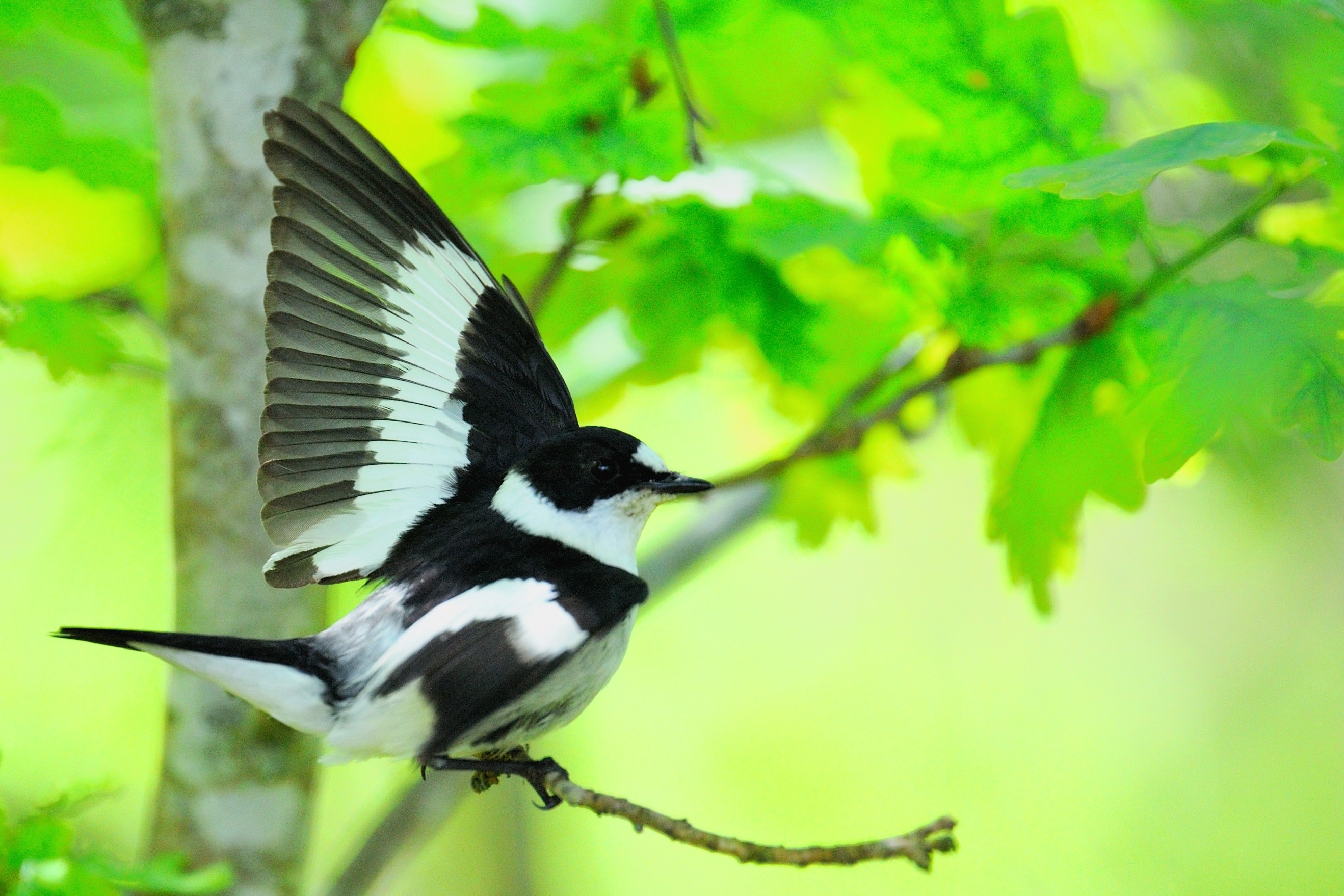 The fieldwork underlying our study was started by Lars in 1980. Thousands of nestboxes have been placed in several plots of woodland covering much of the possible breeding habitat on the southern tip of Gotland, a Swedish island that sits in the Baltic Sea. Collared flycatchers, which otherwise breed in natural tree cavities, readily accept nestboxes as nesting sites, and parents are easily trapped as they enter their box. Importantly, every individual is uniquely marked by fitting a small, numbered leg-ring, allowing it to be identified every year that it breeds ­(despite flying to and from Sub-Saharan Africa every year to overwinter, individual flycatchers will return to breed at the same location year after year). This marking effort also extends to chicks, which are ‘ringed’ (or ‘banded’ in American ornithology parlance) before leaving the nest. As fledglings recruit to the breeding population and have offspring of their own, a family tree for the population (its ‘pedigree’) is enlarged – in our study, the pedigree contains 15 generations.

In 1981, Lars began measuring the prominent forehead patch of the male breeders – the patch is squarish in shape, so its size can be easily quantified in the field as the product of its height and breadth, both measured using a ruler or a caliper. These measurements allowed Lars and his collaborators to demonstrate that the forehead patch functioned as an ornament – males with large forehead patches were favoured by females looking for a mate. 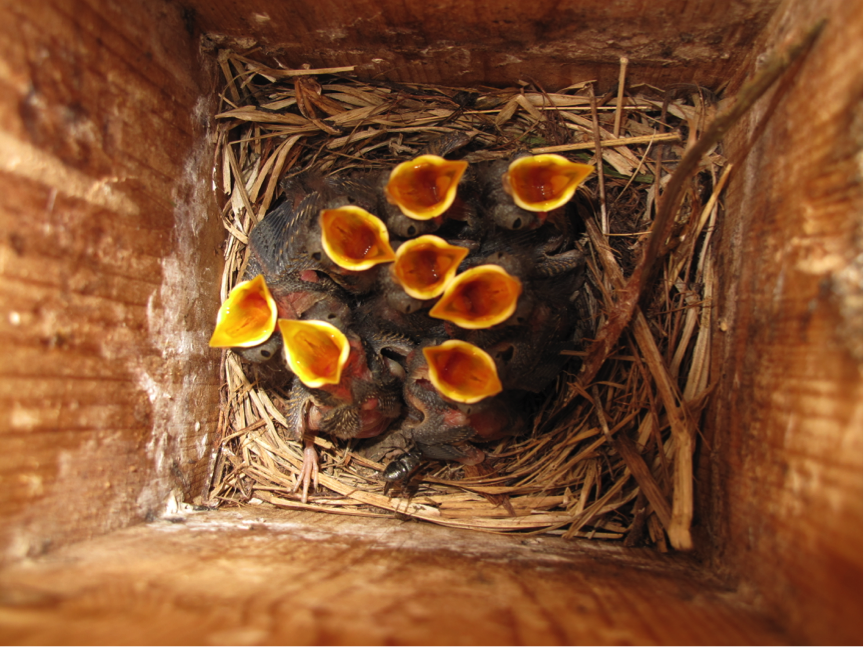 The idea that the declining ornamentation may, in part, be due to evolution is not new: previous studies looked at this issue but found only hints at evolutionary change. Our study benefits from additional sampling that has been conducted, of course, but also relies on improved analytical methods for estimating genetic change (see Hadfield et al. 2010, Am. Nat.). Using the ‘animal modelling’ approach to infer the population’s genetic change via phenotypic measurements and knowledge of the relatedness of individuals (described by the pedigree), we detail an evolutionary decline in ornamentation among breeding males.

That we can document a dramatic change in selection and a concurrent evolutionary decline over 34-years strikes me as remarkable: until recently, the prevailing opinion on typical evolutionary rates was that they are glacial. Yet over recent years contrary observations have coalesced into a body of work that focuses on ‘eco-evolutionary dynamics’: the idea that evolution happens quickly enough to impact ecological processes (such as the selection that generates it). From Lars’ perspective, a core aspect of his study system has been upturned by our results; earlier work demonstrating the fitness advantage of being heavily ornamented appears to be outdated. The least ornamented males are now the fittest, and our study suggests this negative selection on ornamentation will become more intense if spring temperatures continue to rise.

We view this study as a beginning, rather than a conclusion. The lack of a proximate mechanism linking the changing local climate to the reversed selection remains frustrating, and more work is needed to understand how the long-term genetic shift in ornamentation is being realised.

Taking a step back, though, our study demonstrates the value of long-term population studies to evolutionary biology. As others have highlighted (e.g., Clutton-Brock & Sheldon 2010 TREE, Mills et al. 2015 TREE), such studies offer unique insights into the nature of evolution: while examples of exceedingly rapid evolution are known (for example, the evolutionary responses of Darwin’s finches on Daphne Major to extreme weather documented by Peter & Rosemary Grant), these appear to be atypical, and most demonstrations of ‘evolution in action’ rely on data collected over several decades. Given the challenging funding environment facing many biologists, and the short-term perspectives typically adopted by funding agencies, continuing these efforts is seldom a trivial task. Yet they are often uniquely placed to address important biological questions (though this is not without its own challenges, given that replication of studies is all but impossible). Indeed, Lars could not have foreseen back in the early 1980s, as he plodded between the trees, ABBA presumably chorusing out of his Walkman (for younger readers, a Walkman was basically an analogue iPod the size of a shoe box that was capable of storing about 12 songs), that his study would one day be demonstrating the impact of climate change on evolutionary dynamics. As recently described in another Behind the Paper post, valuable biological insights often benefit serendipitously from the painstaking efforts of past fieldworkers. Nowhere, it seems, is this seen more frequently within ecology and evolutionary biology than for long-term field studies. 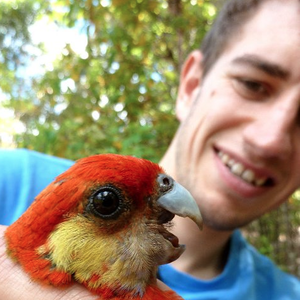