The ash tree genome project published in Nature today began, for me, with a lunchtime conversation with Andrew Leitch in the SCR bar at Queen Mary University of London in early November 2012. Ash dieback had been found in natural woodland in England for in late October. Such was the seriousness of the likely environmental impact of the disease that the Prime Minister had convened the emergency COBRA committee to discuss the government’s response. 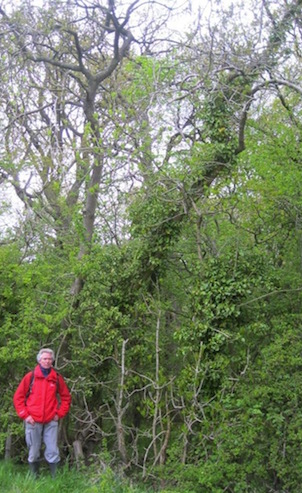 “You’re one of the only people in the country working on tree genome sequencing,” Andrew told me, referring to my ongoing work on birch trees. “Why don’t you sequence an ash tree genome? Apply for a NERC Urgency grant – this is exactly the kind of thing urgency grants are for.”

He was right. In December the Natural Environment Research Council (NERC) announced that they would fund me to begin work on the ash tree genome.

I knew that for the best results I needed to find an ash tree with low heterozygosity. Variation among maternal and paternal genome copies within an individual is confusing for genome assembly software: it is hard to work out if variants are from the different genome copies, or repeats within the same genome. In a crop species it would be easy to get hold of an inbred line with almost zero heterozygosity, but for a native tree species this was an impossible ask.

Fortunately, a decade previously David Boshier (Photo 1) from the Plant Sciences Department at Oxford University was studying the sexual system of ash as part of the EU-funded FRAXIGEN project. During his experiments, he self-pollinated ash trees in a wood in the Cotswolds. Presciently, he planted out the selfed offspring and maintained them for future research at the Earth Trust. In 2012, these tree were there waiting for us – the ideal candidates for genome sequencing. We chose one (Photo 2) whose mother had lowest heterozygosity in surveys done by David and his colleagues with microsatellite markers.

We collected tissues and set to work extracting and sequencing the DNA. 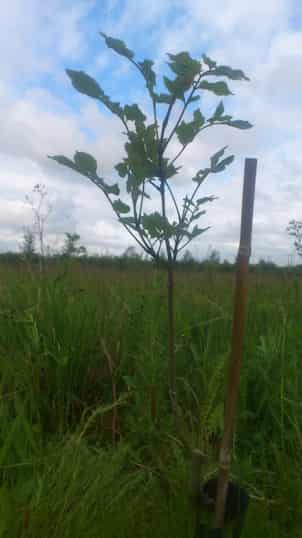 My QMUL colleague Richard Nichols had just won a Marie Skłodowska-Curie Initial Training Network for genomics training of 13 PhD students, two of which he assigned me to supervise. This became their project. Jasmin Zohren extracted the DNA from the tree, and Lizzy Sollars, who was placed at CLCbio in Denmark (now Qiagen, Aarhus), assembled the reads.

Eurofins were so interested in the project that they gave us a discounted price on 454 and Illumina sequencing, and a rapid turnaround time. In April 2013 we released the first version of the ash tree genome at our website www.ashgenome.org. We kept improving this as more data came in, and Lizzy Sollars found better and better ways of doing the assembly.

Our team at QMUL was strengthened when we had a new project funded under the Tree Health and Plant Biosecurity Initiative. Laura Kelly joined us as a postdoc. She annotated the repetitive elements in the ash genome, and compared its genome content to ten other plant genomes. On the back of her project, Endymion Cooper joined us as a Marie Skłodowska-Curie Fellow and helped Lizzy in analysing evidence for whole genome duplications in the ash genome.

In early 2013, the Department for Environment, Food and Rural Affairs (Defra) and the Biotechnology and Biological Science Research Council (BBSRC) funded the ‘Nornex’ project to investigate all aspects of ash dieback both from the fungal and the tree perspective. Allan Downie, who led this multi-institution consortium, invited us to come on board with the ash tree genome work. This ultimately led to the fruitful collaboration represented in today’s Nature paper.

Through Nornex, David Swarbreck and Gemy Kaithakottil ran our ash genome sequence and transcriptome data through The Genome Analysis Centre’s complex genome annotation pipeline, identifying the protein coding and other genes in the genome.

We collected tissues from 37 further ash trees from all over Europe, growing at the Earth Trust in a trial set up in 2004 under the EU-funded “Realising Ash’s Potential” project, by Gerry Douglas and Steve Lee. These were sequenced at The Genome Analysis Centre (now the Earlham Insitute) under the direction of Mario Caccamo. Lizzy Sollars and Ricardo Ramirez-Gonzalez used this data to analyse genomic diversity in Europe, and Lizzy used it to estimate past effective populations sizes and examine the species’ phylogeography.

Using an early version of our genome assembly as a reference, Andrea Harper and Ian Bancroft at the John Innes Centre collaborated with Erik Dahl Kjær, Lene Rostgaard Nielsen and Lea Vig McKinney at University of Copenhagen to discover transcriptomic markers for susceptibility to ash dieback in Danish ash trees. This work was published in Scientific Reports. Once we had a final genome assembly, they reanalysed their data, and also tested populations of UK ash trees for the markers. They used this to predict that low susceptibility to ash dieback may be more common in UK ash trees than in Denmark.

When we submitted our manuscript to Nature in early 2016, the editors and reviewers were favourable, but wanted a bit more. Ian Bancroft suggested we should bring in metabolomics work conducted at Exeter University under the Nornex project. Murray Grant, Christine Sambles and David Studholme were happy to come on board with some exciting data suggesting that levels of iridoid glycosides may be associated with level of susceptibility to ash dieback.

Early in 2016, Jo Clark at the Earth Trust informed us that our reference genome tree was now infected with ash dieback. When we had collected the original tissues, ash dieback had not reached the Earth Trust site in Oxfordshire. But now we know that the tree we have sequenced is susceptible.

Ash dieback continues its spread across Britain, but, if Ian and Andrea's predictions prove true, less rapidly than we had first feared.