What Darwin really meant and what it means for today's "solutions"

One of the hidden gems of Royal Botanic Gardens Kew is its library. I spent several happy hours there researching a recent letter to Nature Ecology and Evolution, published in June under the title "The deepening of Darwin's abominable mystery". 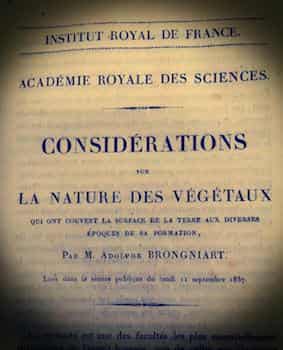 The brightest moment came when a helpful librarian found me an 1838 reprint of a lecture by palaeobotanist Adolphe Brongniart: a lecture that I had not even known existed. Not only did this turn out to be the lecture that had provided Darwin with key information about the plant fossil record as he wrote his notebooks on the transmutation of species, but it was reprint sent by the author to J. S. Henslow, Darwin's botany professor at Cambridge. It probably came to Kew via his son-in-law Joseph Hooker, Director of Kew, to whom Darwin famously wrote in 1879 that “the rapid development as far as we can judge of all the higher plants within recent geological times is an abominable mystery” .

At moments like this, history is tangible. And it is sometimes at such moments that we have to reassess our anachronistic understandings of past science. This is the message of my Nature Ecology and Evolution letter. In it I argue that Darwin's "abominable mystery" has been misunderstood ever since it came into the public sphere in 1903. This is because it has been assumed that by "higher plants," Darwin meant "angiosperms"; that is, all flowering plants.

The 1903 edition of Darwin's letter

Between 1879 and 1903 Darwin's letter to Hooker about the "abominable mystery" lay unpublished. When it was published in 1903, the editors, A. C. Seward and Francis Darwin left the readers in little doubt that Darwin meant "angiosperms" when he said "higher plants". This can be seen in their page-header shown below (N.B. the word "abominable is at the end of the previous page).

Later in the book, the editors described their own view of the plant fossil record in a footnote saying: "No satisfactory evidence has been brought forward of the occurrence of fossil Angiosperms in pre-Cretaceous rocks. The origin of the Monocotyledons and Dicotyledons [i.e. the two major groups of Angiosperms as they knew them] remains one of the most difficult and attractive problems of Palaeobotany." (p.239).

The understanding of the fossil record that A. C. Seward and Francis Darwin had in 1903 is still the understanding held by the majority of palaeobotanists today. In fact, Nature Plants recently published a through debunking of all claimed pre-Cretaceous angiosperms by some of the world's most authoritative experts in the palaeo-flora of the lower Cretaceous.

So from 1903 to today, everyone has thought that Darwin's "abominable mystery" is about the origin of all angiosperms, suddenly and in great diversity in the Cretaceous, with no obvious ancestral lineage.

It has therefore been assumed that any reliable pre-Cretaceous angiosperm fossil, or any clear progenitor lineage, or the identification of a sister lineage to the angiosperms, would be a major step towards the solution of the abominable mystery.

The problem is - as I discovered from Henslow's copy of Brongniart and several other nineteenth century sources - Darwin's understanding of the plant fossil record was rather different. Darwin thought that there were pre-Cretaceous angiosperms, and that there was a clear progenitor lineage for the Cretaceous diversity of "higher plants".

This surprising discovery first began to dawn on me when I read an 1879 lecture by John Ball, upon which Darwin was commenting in his "abominable mystery" letter to Hooker. Ball's essay is a bit obscure to the modern reader as he refers to two groupings of angiosperms: "exogens" and "endogens". These are obsolete terms, from de Candolle, for monocotyledons and dicotyledons (to make it even harder on the modern reader, the term dicotyledon is also obsolete, although most botanists at least still understand the term).

John Ball (1879) describes the plant fossil record as showing that exogens (monocotyledons) have a long fossil record, and the endogens (dicotyledons) suddenly evolved from them and diversified rapidly in the Cretaceous. In the context of this lecture, therefore, Darwin seemed to be referring to the sudden appearance of diverse dicotyledons - rather than all angiosperms - in the fossil record as the "abominable mystery".

This proved easier than expected, because the Darwin Correspondence Project have in the last two years published letters between Darwin and two palaeobotanists Oswald Heer (in 1875), and Gaston de Saporta (in 1876). In these letters, it is clear that Darwin believed that it was dicotyledons that appeared suddenly in the Cretaceous, not angiosperms as a whole. This was partly on the basis of original findings described to him by Oswald Heer, who wrote to Darwin: "The interval from the Devonian to the Cretaceous is immensely long, and, as far as we know until now, the vegetable kingdom then consisted only of cryptograms, confiers & cycads and a few monocots. In the upper Cretaceous , however, the flora suddenly underwent a great transformation and...there appear for the first time the (angiosperm.) Dicotyledonae".

As I was browsing through volumes of Darwin's Correspondence in the Kew library, I noticed near them a plump hardback Concordance to Darwin's notebooks. On a whim, I looked up the word "angiosperm", and found nothing at all. The I looked up the term "dicotyledonous" and found a line written by Darwin in the late 1830s that seemed to be about the fossil record.

Did Kew have a copy of Darwin's notebooks? Yes they did, published in the Bulletin of the British Museum in 1960. I found the reference, and to my intense interest read:

Here is a scan of the page in Darwin's first notebook on the transmutation of species (reproduced with permission from J. van Wyhe ed., Darwin Online)

What this meant is that in 1837 or 1838, decades before his correspondence with Oswald Heer and Gaston de Saporta, and his reading of John Ball's essay, Darwin thought that monocotyledons had a much longer fossil record than dicotyledons.

I requested this book from the Kew librarians, and looked up page 318. There was nothing relevant there about the monocot fossil record. I scoured the volume, and could not find what Darwin was referring to.

Then I noticed that the librarian had also brought me another book, a much thinner volume, belonging to J. S. Henslow. It contained a reprint of a lecture given by Brongniart at L'Institut de Paris in 1837, with the catchy title: Considerations sur la nature des vegetaux qui ont couvert la surface de la terre aux diverses epoques de sa formation.

I picked this up. It had fewer than 300 pages, so it seemed futile to look for Darwin's references. But then on pages 19, 20 and 21 respectively I found the information that Darwin had noted as being on pages 319, 320, and 321 of the edition that he had been reading. It was this lecture by Brongniart, rather than his more famous magnum opus Végétaux fossiles, that Darwin was referring to in his notebooks.

Darwin considered the "abominable mystery" to be the sudden appearance and diversification of dicotyledons in the Cretaceous, with monocotyledonous angiosperms present in the fossil record back to the carboniferous.

Below is a diagram taken from an 1885 textbook "Sketch of Paleobotany" by Frank L. Ward, which depicts the plant fossil record as it was understood in Darwin's time. I have highlighted in green the part that has not been widely believed since around 1900. 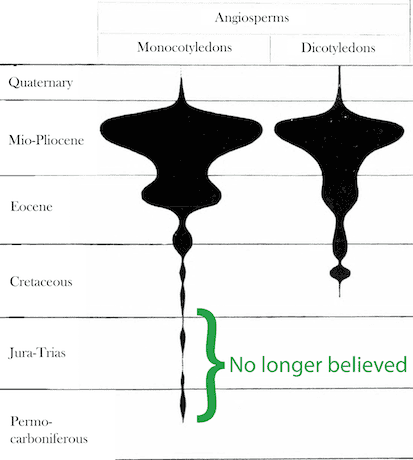 What this means for today

This means that if Darwin were here today, and we persuaded him that Brongniart, Heer and de Saporta had mistaken the identity of the pre-Cretaceous "monocot" fossils that they had found in pre-Cretaceous rocks, Darwin would consider the mystery to be a lot more abominable in 2017 than it had seemed to him in 1879. Far from being solved, his abominable mystery has got a lot deeper.

Thus, many of the solutions we are seeking for the mystery today - such as pre-Cretaceous angiosperms - even if they were found, would simply restore the mystery to the depth that it appeared to have for Darwin. They wouldn't solve it.

We often think that the history of science is a tale of inexorable progress, where mysteries get smaller and smaller. Darwin's abominable mystery is a reminder that sometimes the mysteries get bigger.